Dalit student suicide is yet another Shambuk Vadh!Whay only Dalits,every citizen of India should cry Freedom from this blood Hungry corporate regie of fascism!Why only Kejriwal should speak?

Dalit student suicide is yet another Shambuk Vadh!Why only Dalits,Humanity should cry Freedom to liberate from this blood Hungry corporate regime of fascism!KU Klax Klan!Neo Nazi!Why only Kejriwal should speak? 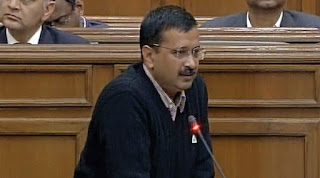 Mind,you,Kejriwal faces sedition trial against him for his freedom to speech as the elected CM on an Indian state with thumping majority.They should have lodged the sedition FIR against every Voter now!

They worship DR.BR Ambedkar as an incarnation of Bhagwan Vishnu.

It is Shri Ramchandra all the way armed with nuclear energy and all the sensex forces to kill the ninety percent irrelevant masses including the Dalits.

It is blatant exclusion,ethnic cleansing .Depopulation!

OBC,Adivasi,minorities have joined the forces of self destruction to make India Klu Klax Hegemony of racist Hatred brute,merciless.

The Minister branded Ambedkar Students Association as anti National and wrote to HR ministry which is no less than the Hail Hitler branded fascist Nazi Camp!

Why Mayawati does not lead from the front while Kejri speaks out again as he has already asked resignation from the PM?

Mind,you,Kejriwal faces sedition trial against him for his freedom to speech as the elected CM on an Indian state with thumping majority.They should have lodged the sedition FIR against every Voter now!

Thus,speaks Kejri.Why Ms Mamta Banerjee keeps mum as she is the most vocal Chief minister?

What about other Non BJP Chief Ministers and opposition leaders,specifically those living on Ambedkar ATM Cash?

Feed on Dalit Bahujan Votebank,eating and drinking blood,bones,flesh of the ninety nine percent to make merry in in Billionaires' arena of Power politics?

Hoising Blue Flag all on Babasaheb Dr BR Ambedkar`s name and do everything to strenghthen the roots of the inherent caste system to sustain the regime of apartheid?Regime of corporate Free Market Sensex!

Kejriwal demanded that Prime Minister Narendra Modi apologise and that he take action against certain Union ministers for what he termed was the 'murder of democracy'.

No evidence initially, then flip-flop began!

Kejriwal demanded that Prime Minister Narendra Modi apologise and that he take action against certain Union ministers for what he termed was the 'murder of democracy'.

Delhi Chief Minister Arvind Kejriwal on Tuesday reacted to the death of Dalit PhD student Rohith Vemula, terming it a 'murder of democracy' for which Prime Minister Narendra Modi should apologise.

In another tweet, Kejriwal said: "It's not suicide. It's murder. It's murder of democracy, social justice and equality. Modi ji should sack ministers and apologize to the nation."Hyderabad: Suspended Dalit Student Hangs Himself

Rohith was found dead at Hyderabad Central University on Sunday morning. The issue took a political turn with allegations that the extreme action was a result of discrimination against Dalit students at the behest of Union Labour Miniser Bandaru Dattatreya, who had written a letter to HRD Minister Smriti Irani, seeking action against their "anti-national acts".

Rohit was among five research scholars who were suspended by Hyderabad Central University (HCU) in August last year and also one of the accused in the case of assault on a student leader. They were also kept out of the hostel.

On Monday, Dattatreya and Hyderabad University Vice Chancellor were named in an FIR, triggering massive protests and demands for their removal from their posts.