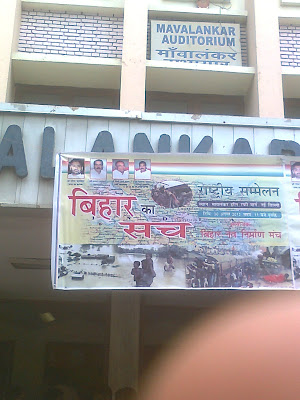 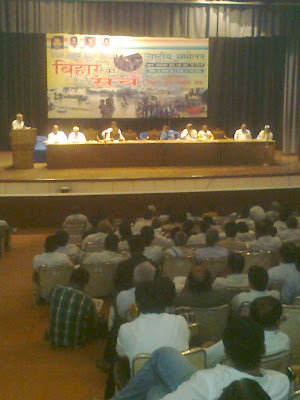 A new party, Bihar Navnirman Manch (BNM) that was launched on June 21, 2011 held a conference in the national capital on August 30 to reveal the truth about Bihar's current situation. 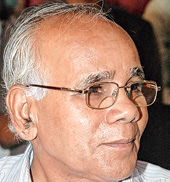 . He argued based on government's own data. Agriculture has been neglected although three-fourths of the population of the state depends on it. The state is being run by a council of secretaries and the ministers have lost their relevance. He referred to the megalomania of Nitish Kumar who began as a leader of the government, then transformed into government itself and now he is the State. 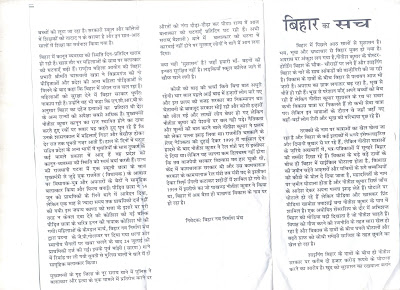 Member of Parliament, Upendra Singh Kushwaha who is the convener of the Manch was present on the occasion besides several other leaders and dignitaries from Bihar.
Posted by Krishna at 9:17 AM No comments: 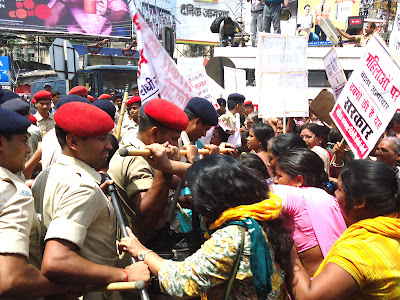 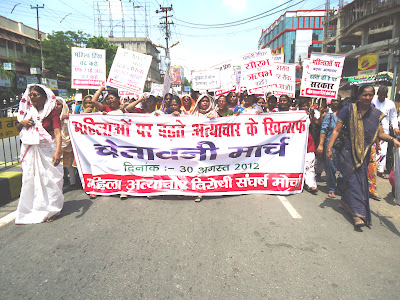 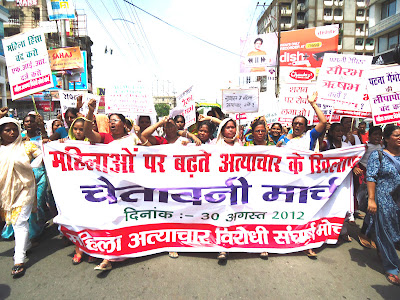 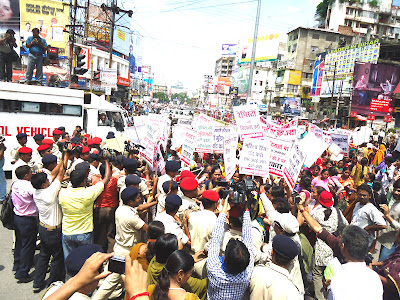 Increasing Gang Rape and Atrocities on Women
The anger of women's procession against the rapidly increasing rapes, abductions and murder of women as well as inaction of police and administration in Bihar manifested itself by breaking Section 144 at Dak Bunglaw Crossing in Patna. The procession of women, coming in thousands, was taken out from historic Gandhi Maidan under the banner of Mahila Atyachar Virodhi Sangharsha Morcha (Af front of Struggle Against Atrocities on Women). The procession was conversed into a mass meeting after police prevented them to go ahead by closing the gates on the road at Hartali More.

Addressing the vast gathering of women at Hartali More, Sadhana Mishra, Secretary, All India Mahila Sanskritik Sangathan (AIMSS), Bihar State Unit said, “The incidents of rape, atrocity, abduction and murder of women are increasing rapidly in the regime of Bihar CM Nitish Kumar. Committing the crimes by the criminals and men of power have became the daily incidents. The opening of liquor shops on the public places in the name of collecting revenues has added the fuel in the fire.” Claiming itself the government of good governance the Nitish Government increasing the revenues by attacking the modesty of women, she added.

Among others who addressed the gathering were Kanchan Bala, Anamika, Rampari Devi, Sharat, Shiwani and Nivedita. Terming the Nitish Government out and out anti people all the speakers urged the people in general and the women in particular to come forward and build a powerful sustained movement against the attack on the modesty of women. 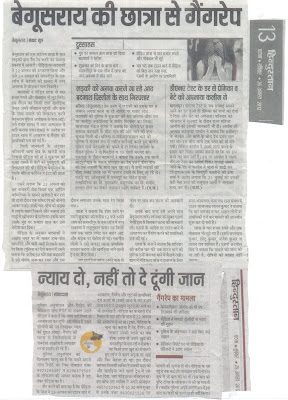 Posted by Krishna at 7:20 AM No comments:

As India celebrates its Independence Day, the misfortune of this couple from a remote village in Bihar underscores just how far the country still has to go.

A week ago, Chatis Rai and Pramila Devi lost their eldest son. Seventeen-year-old Rahul died far from home, at an institute for juveniles in Jaipur. But the Rais, impoverished farm workers at Banka's Leelagora village, were unable even to bring home his body.

On Sunday, Rahul was finally cremated by strangers.

The authorities — the Banka district magistrate and the police — claimed they had offered assistance to the family so they could bring back the body.

The Rais said the assistance was more in the nature of a token.

“It was just not enough to travel to Jaipur, bring the body back and perform the last rites.”

Nand Gopal Thakur, a neighbour, said the family dropped the idea when they realised that even by pooling in money from every source, they could not meet the expenses.

For the Rais, the tragedy of their son’s death overshadowed the issue of his cremation. Rahul, the eldest of their five children, had left home on July 17 with Rs. 700 the family had saved to repair their leaking roof. But he left with a dream.

As one of the numerous migrant labourers from Bihar, he was to keep home fires burning.

But he was caught travelling without a ticket at the Jaipur railway station. And being a minor, he was sent to Kishore Grih, a juveniles’ home, where he died of illness, said Arun Kumar Rai, station house officer of Banka.

Posted by Krishna at 8:31 PM No comments: