Weep Humanity!Weep!Ten more Aylans sacrificed in the sea!Weep Humanity! Smart Cities need only smart people and the slums would not be allowed in smart cities neither the Slumdogs! Govt announces first 20 Smart Cities; Bhubaneswar tops list, Mumbai misses out! 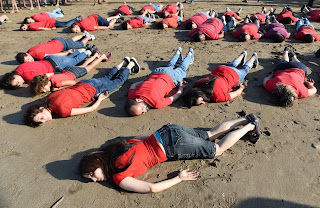 Smart Cities need only smart people and the slums would not be allowed in smart cities neither the Slumdogs!

"Nobody can stop an idea whose time has come and this applies to the Smart City (initiative as well)," Naidu said while announcing the list of cities that were selected through the 'Smart City Challenge Competition'.

Releasing the list of 20 top winners of the Smart Cities competition, Urban Development Minister M Venkaiah Naidu said a total investment of Rs 50,802 crore has been proposed for the selected Smart Cities and towns during the five year period.

The legacy of holocaust continues and shared by wordwide humanity as Ten more Aylans sacrificed in the sea!

War and Civil war kill the civilization and humanity remains to struggle for survival without survival kit whatsoever.No graphical detail is  enough to paint the complete picture of the  plight of humanity.Oil war continues despite oil crash!

In India,the indiscriminate urbanization all on the name of growth,free flow of foreign capital and business friendly governance pushing so hard to opt for War Economy under Manusmriti regime would culminate into more refugee influx from within as the agrarian communities, adivasi and Dalits convert themselves in the Hindutva of migration to be subjected for displacement.

Smart Cities need only smart people and the slums would not be allowed in smart cities neither the Slumdogs!

Mind you,the government of India under Prime Minister Narendra Modi has a vision of developing 100 smart cities as satellite towns of larger cities and by modernizing the existing mid-sized cities.

The 100 potential smart cities nominated by all the states and union territories based on Stage 1 criteria prepared smart city plans which were evaluated in stage 2 of the competition for prioritizing cities for financing. In the first round of this stage, 20 top scorers were chosen for financing during 2015-16. The remaining will be asked to make up the deficiencies identified by the Apex Committee in the Ministry of Urban Development for participation in the next two rounds of competition. 40 cities each will be selected for financing during the next rounds of competition.

Meanwhile,However, with European governments struggling to deal effectively with over a million people who entered the union to claim asylum last year, politicians are focusing their efforts on boosting capacities to support migrants in Turkey and stem the flow of people leaving for Europe.

EU foreign policy chief Federica Mogherini pledged this week that a promised 3 billion euros ($3.3bn) in aid would be delivered to Turkey imminently, despite objections from Italy, which has demanded to know exactly how the money will be spent.

As it happened,Ten children were among at least 24 people who died when a boat carrying refugees and migrants sank off the Greek island of Samos late on Wednesday night, the Greek coastguard said on Thursday.

However,around 10 people were rescued by the Greek coastguard as well as by vessels from Frontex, the European border agency.

Earlier on Wednesday, rescuers discovered the bodies of seven people, two of them children, who had died when their boat sank off the coast of Kos.

The fresh sinkings come less than a week after 45 people were drowned when two separate boats ran into trouble on the way from Turkey to Greece.

Turkey is the main departure point for people attempting the dangerous journey, often in overcrowded boats to Greece.

So far in 2016, an average of roughly 1,500 people a day have arrived on the Greek islands, some of which are as little as four kilometres from Turkey across the choppy Aegean Sea.

More than 200 people have died attempting the crossing this year.

Doctors Without Borders, which assists people on stricken boats off the Greek coast, on Thursday called for European governments to open up safe routes for people to travel to the 28-member union.

The Centre on Thursday announced the names of first 20 cities that are to be developed into Smart Cities of India with a proposed investment of Rs 50,802 crore during the next five years.

Bhubaneswar emerged on top among 20 cities, including Pune, Ahmedabad, Chennai and Bhopal, that have been selected as part of the first batch of the Smart City initiative. However, Mumbai failed to make it to the list.

The NDMC area of the Delhi Union Territory also made it to the grade with other cities like Pune, Jaipur, Surat, Kochi, Ahmedabad, Jabalpur, Visakhapatnam, Solapur, Davanagere, Indore, Coimbatore, Kakinada, Belagavi, Udaipur, Guwahati, Chennai, Ludhiana and Bhopal completing the list.

Overall, 97 cities from across the country were put up for the Smart City Challenge competition.

--
Pl see my blogs;
http://ambedkaractions.blogspot.in/
http://palashscape.blogspot.in/
Feel free -- and I request you -- to forward this newsletter to your lists and friends!
Posted by Palash Biswas at 11:21 PM