What would say Mr Vishwanath Tiwari and Mr AshokVajpayee now?Believe ,it would be rather interesting!

What would say Mr Vishwanath Tiwari and Mr AshokVajpayee now?Believe ,it would be rather interesting!

Palash Biswas
Why should we allow Beef Ban to become the focus skipping
the economic,social and political issues,burning issues
which must be addressed immediately? by Palash Biswas
Thanks Kejri!Hope not a Gimmick again!
Kejriwal sacks minister on live TV for corruption!
For me the coscience speaks for all.It is human henomenon and it has nothing to do with any institution,mission ,agenda or politics.It is apolitical.Writing is always apolitical creativity and it might not be enslaved.
Mr.Ashok Vajpayee despite known to be a famous Hindi poet,hates Hindi and the vernacular world as he roots in administration as an IAS.He had never been a writer.
Perhaps Shitya Academy President Tiwari refrred to his reputation which might be linked to academy prize.Leo
Tolstoy and Jean-Paul Charles Aymard Sartre (/ˈsɑrtrə/; French: [saʁtʁ]; 21 June 1905 – 15 April 1980) was a French philosopher, playwright, novelist, political activist, biographer, and literary critic rejected Nobel Prize.but both of them are treated more reputed than hundreds of Nobel Laureates.
Indian Masses know their writers for their works,not for academy awards! Premchand or Muktibodh are not known for academy awards,Nor Manto or Sharat.
Vajpee credited Nayantara Sehgal for initiative which was takenby  a Hindi writer and Poet Uday Prakash.

Yet another vernacular writer returns the Acadmy award and the autonomy of Sahitya Academy seems quite detached with the worsening climate in India and the President Tiwari voices the governance of fascism and he stands for BEEF GATE Riots and Communal Polarization.
It`s a Shame for all those who claim themselves apolitical,creative and committed to diversity an pulralism inherent in Indian citizenship.
Media reports:Now Malayalam author and activist Sarah Joseph on Saturday returned the prestigious Kendra Sahitya Akademi award over rising 'communal violence' cases in the country. 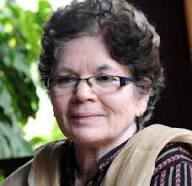 Sarah Joseph
Novelist
Sarah Joseph is a novelist and short story writer in Malayalam. She won the Kendra Sahitya Akademi Award for her novel Aalahayude Penmakkal. She also received the Vayalar Award for the same novel. Wikipedia
Born: 1946, Thrissur
Books

"The country is now passing through very tough times. I feel it's worse than the black days of the Emergency," said Joseph while announcing her decision to return the award she won in 2003. "I was honoured to receive the prestigious award. But now I feel we the writers have a role to play in the way things are going on in our country. So as a matter of protest, I will return the award along with the cash award that I received then," she told reporters in Thrissur. With this decision, she joins other writers, including Nayantara Sahgal and Ashok Vajpeyi, former chairperson of the Lalit Kala Akademi, who returned their Sahitya Akademi awards. Joseph, 69, received the award for her novel 'Aalahayude Penmakkal '(Daughters of God the father) first published in 1999. She heads the Aam Aadmi Party's unit in the state and contested the Lok Sabha polls from the Thrissur constituency last year. Malayalam and English poet K Satchidanandan today quit Sahitya Akademi over the same issue. ​On Friday, Karnataka-based author Shashi Deshpande had resigned from the Sahitya Akademi's general council to protest against its silence on the murder of Kannada writer MM Kalburgi.Earlier, Hindi poet Ashok Vajpeyi and writer Nayantara Sahgal had announced their decisions to return the Sahitya Akademi awards, as a mark of protest.
https://www.youtube.com/watch?v=XknTe35F_0k

Pl see my blogs;
http://ambedkaractions.blogspot.in/
http://palashscape.blogspot.in/
Feel free -- and I request you -- to forward this newsletter to your lists and friends!
Posted by Palash Biswas at 3:09 AM