West Bengal—Communal Amity At The Altar Of Crude Politics!

West Bengal—Communal Amity At The Altar Of Crude Politics! 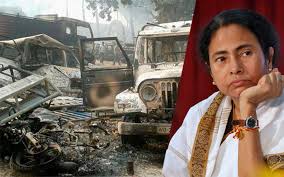 Dear Sir,
We are following Democracy. Once elected (any how) the representatives (elected by us) form a Government and during election or prior to election mode, they want to ensure that they will not get defeated in the next election. They do anything for this assurance. They care neither for the other citizens nor the State or country as such. What can we do under such conditions. The minorities have been appeased so much since last 60 odd years that if it does not happen, people may feel something is wrong, is it not? In recent past our PM also has warned (his party men) not to criticize minorities (as read from news papers). What does it mean?
As per GoogleSearch Definition of Politician is most selfish person. I am attaching it brought out from the source. We have all our representatives as mere politicians. Where are any leaders that Bhaarat in fact en-quires of all?
With regards,
------Mukund Apte
On Sat, Jan 9, 2016 at 1:21 PM, D.K. Mittal<patriotsforum123@gmail.com> wrote:

January 9, 2016
Dear Friends,
Subject: West Bengal—Communal Amity At The Altar Of Crude Politics
Because the case belongs to West Bengal, we have been hesitating to write on this to deliberately refrained from writing on the subject. There have been a charge against us for being anti-West Bengal. Now, a pretty straight-forward write-up in the public domain has come out, we felt we can now express our views on the subject. The lead editorial in "The Pioneer" of date January 9, 2016. refers, titled, "Mamata Plays With Fire", copy attached).
We are reproducing and highlighting some parts from the attached mail in order to share with you the thrust of the editorial.
·       The communal violence in West Bengal's Malda district needs to be viewed from two perspectives: Law and order, and electoral politics. In neither case does the ruling Trinamool Congress come across in favourable light, and Chief Minister Mamata Banerjee's statement that there is no "communal tension" in the State only makes it worse. On Sunday, the Anjuman Ahle Sunnatul Jamat's large rally, protesting Akhil Bharat Hindu Mahasabha leader Kamlesh Tiwari's allegedly derogatory remarks, become violent — with gunfights, instances of arson and assault, and attacks on private and public property.
·       In terms of law enforcement, there is no justification for the Government's inability to control the situation. Police officials were overwhelmed when, in fact, they should have been expecting trouble. Communal tensions in West Bengal have been rising since the TMC came to power in 2011. The situation has been especially volatile in the State's Muslim-majority districts and divisions. Malda, where 51 per cent of the population is Muslim, is no exception. Moreover, the manner in which Sunday's incident erupted raises suspicions. For one, the issue at hand is stale and without local relevance — Mr Tiwari's controversial remark about Prophet Mohammed and homosexuality was made more than a month ago, in response to an equally absurd comment by Samajwadi Party leader Azam Khan.
·       Add to this, the electoral arithmetic of the West Bengal Assembly election, which is scheduled for later this year, and the different pieces of the puzzle begin to fit in. Since coming to power with a historic mandate in 2011 that ended the Left's three-decade long stranglehold on West Bengal politics, the TMC has gone about consolidating power by all means, fair and foul — including polarising the votebank on communal lines. In this context, Malda will be an important test case: Alongwith neighbouring Murshidabad (where 66 per cent voters are Muslims), Malda has traditionally been a Congress stronghold. For many years, the Left tried but failed to take control. In 2011, the TMC won just one of the 12 Assembly seats in Malda, but this year hopes to win up to five, after defections from the Left and the Congress, including the high-profile move of Congress strongman Ghani Khan Chowdhury's brother.
Questions arise:
·       Have the IAS bureaucrats and the police set up surrendered themselves to the dirty tricks of politics? Conscience sold out?
·       Are not some persons from behind the scene fomenting the situation?
·       How could the State Chief Minister totally deny there was no communal tension in the State?
·       As one part of the editorial rightly raises the point "Second, the rally organiser, an otherwise little-known outfit, had ample resources to mobilise a large crowd. This would have not have been possible without the knowledge, if not the tacit support, of local Government authorities. Third, the fact that six of the nine rioters who were charged by the police were freed on bail within hours, even as the situation on the street remained tense, points to political patronage."
Well, the Union Home Minister was to visit Maldah on the 9th January. Some more engagin piece of work must have kept him away. That has been a pity. Was this not because of "crude politics working at the alter of communal amity". Well, Kendriya Griha Mantriji, it would be good if you visit the place in Maldah even at Dividends will follow.
Vandemataram,
Your sevak,
D.C. Nath
(Former Spl. Director, IB)
(President, Patriots' Forum)
9811995693
(Note: In case, you are not interested in receiving mails from us, please let us know. It has come to our notice that some friends are receiving our mails without our sending such mails to them. That must then be through the system of bulk forwarding resorted to by many. Please check from whom you have received the mail initiated by us but not sent to you. You may also click the delete button in your system. Our mails will never ever thereafter reach you).
Copy forwarded for favour of action, as thought appropriate:
·             The Union Home Minister,
(Shri Rajnath Singh)
·             The Union Home Secretary
(Shri Rajiv Mehrishi)
·             Cabinet Secretary
(Shri Pradeep Kumar Sinha)
·             The Prime Minister's Office
(Shri P.K. Mishra)
·             The National Security Advisor,
(Shri A K Doval)
Yours sincerely,
D.C. Nath
(Former Spl. Director, IB)
(President, Patriots' Forum)
9811995693

--
Pl see my blogs;
http://ambedkaractions.blogspot.in/
http://palashscape.blogspot.in/
Feel free -- and I request you -- to forward this newsletter to your lists and friends!
Posted by Palash Biswas at 10:22 PM