FIGHT AGAINST PRIVATIZATION OF HIGHER EDUCATION!!!

It will be now 85 days since we began our agitation against UGC after it scrapped the Non NET Fellowships for the M.phil/Phd students. Soon the matter was transferred to the MHRD and since then even after several demonstrations at MHRD and our continued occupation at the UGC premises, there has been no response from the ministry and no effort to involve students in the further decision making process has been undertaken.

During our struggle we have raised questions against fund cuts, privatization, commercialization of education and the attempts of State to maintain Brahmanical hegemony over the educational institutions. The state has responded with violence and lathi charged on us many a times, threw water cannons and tear gas on us and tried to silent us with all the force that it could deploy. But ‪#‎OccupyUGC continues.

The ministry was supposed to give a final decision regarding the Non-Net Fellowships by mid December. However, even when it is mid - January we have no word from UGC or MHRD regarding what is the final status of non net fellowships... The MHRD minister Smriti Irani has denied us appointment and no decision has been communicated to us.

Responding to this inaction/negligence/indecision by the MHRD we will again resume our agitation at the MHRD gates on the 13th of January at 2:00pm asking the minister to provide answers to our questions! We are determined to continue our protest till our demands are met and in no way are we interested in playing hide and seek with the ministry.

We assert that the MHRD minister should meet with the students of #OccupyUGC and publicly announce the status of non net fellowships to everyone as soon as possible!

We appeal to all democratic, progressive organizations and individuals to participate in the protest at MHRD tomorrow and express solidarity with our struggle and take forward the fight against privatization of higher education.

▶ 13:25
https://www.youtube.com/watch?v=9siAdc7spfk
Oct 23, 2015 - Uploaded by India Today
In an alleged police crackdown, Occupy UGC protesters were picked up in the wee hours of the morning on ...

▶ 2:43
https://www.youtube.com/watch?v=OXXuPCpRS3I
Dec 11, 2015 - Uploaded by Sabrang India
For those of us who rely on our Facebook friends and Twitter accounts on social media for our news, the only ...

▶ 1:56
https://www.youtube.com/watch?v=Oa4wwDVxFSs
Oct 28, 2015 - Uploaded by AISA
#OccupyUGC movement has erupted after the decision by the University Grants Commission to scrap the UGC ...

▶ 3:04
https://www.youtube.com/watch?v=pFqhggVARKQ
Oct 29, 2015 - Uploaded by Jean Lepcha
Students across India have been protesting against the cancellation of Non-NET fellowship to research scholars ...

▶ 2:35
https://www.youtube.com/watch?v=yoOjLOVsZjM
Oct 23, 2015 - Uploaded by InKhabar
In an alleged police crackdown, Occupy UGC protesters were picked up in the wee hours of the morning on ...

▶ 4:21
https://www.youtube.com/watch?v=a1uZjeUCUu8
Oct 22, 2015 - Uploaded by Saumya Tripathi
The Students are protesting NON STOP at UGC to save their NON NET Fellowship that has been scrapped by ...

▶ 1:46
https://www.youtube.com/watch?v=MnTEObdud8g
Nov 6, 2015 - Uploaded by Oneindia News
The 'Occupy UGC' protest continued for the 17th day with students marching to the HRD Ministry on ...

▶ 4:27
https://www.youtube.com/watch?v=Gj8TjGd42oM
Dec 10, 2015 - Uploaded by Campus TV 2
Taran Dhillon talked with PU student Jagjeet Kaur she along with many other PU students joined Hundreds of ...

Debate on RSTV on 'Occupy UGC' protest With Gopal ...

▶ 3:26
https://www.youtube.com/watch?v=jOAHT9sPMIg
Oct 28, 2015 - Uploaded by Akhil Kumar
This is what happens when you assert your right to education. This is what the Modi govt. does to you if you ...

Police crackdown outside MHRD at the #OccupyUGC ...

▶ 0:29
https://www.youtube.com/watch?v=eaWP-f9SIyw
Nov 18, 2015 - Uploaded by disha641
Students protesting outside MHRD have been brutally beaten up by Delhi Police, the Police first separated the ...

▶ 24:56
https://www.youtube.com/watch?v=fshvf_C3qhI
Dec 13, 2015 - Uploaded by QAD Media
Ankita Rastogi, a student activist, is associated with Occupy UGC movement. This movement is a round the ... 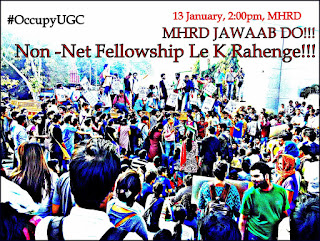 --
Pl see my blogs;
http://ambedkaractions.blogspot.in/
http://palashscape.blogspot.in/
Feel free -- and I request you -- to forward this newsletter to your lists and friends!
Posted by Palash Biswas at 7:36 AM