With immense pleasure, we invite you to participate in the Third Kolkata People's Film Festival, which will be held during 22-24 January 2016, at the Jogesh Mime Academy, Kolkata. The festival runs from 11 am to 9 pm on all three days. Entry is free and open to all. We ask you to register your name and contact at the front desk, in order for us to stay in touch with you.

Below, please find information and highlights of the festival. The full schedule is appended too. For more information on the films, filmmakers, sessions etc., please visit our website: http://corkolkata.wordpress.com

Please spread the word. KPFF is your festival, come and be a part of it!

KPFF is a no-sponsorship, people-funded film festival, now in its third year, organised on the maxim of 'people's culture with people's support', which means it is organised fully by individual contributions from people and by voluntary labour and planning of film society activists and the film audience. No tickets or passes are required to attend. People are welcome to contribute whatever they can or like to support the festival.

The festival is part of the 'cinema of resistance' movement, a India-wide grassroots cinema movement. In Kolkata, the KPFF is organized by the People's Film Collective, a film collective aligned with people's struggles in the country.

KPFF focuses on documentary and other cinema which is people-centric and hopes to create a platform where activists, filmmakers, audiences meet to watch and discuss films together, and exchange dialogue on the burning political and social issues of the day. Some Highlights of the Third KPFF

In the first retrospective of the works of veteran feminist documentary filmmaker Deepa Dhanraj in Kolkata, we will be screening the following four films along with a Keynote address delivered by Deepa. WHOSE LAND? WHOSE LABOUR?

Our main theme on 24 January 2016. Here we will screen three documentaries made in 2015 which raise the most burning issues on land and labour in India at the present times.

Followed by an interaction with the Filmmaker

'On the struggle of contract workers in cement factories of Chattisgarh' 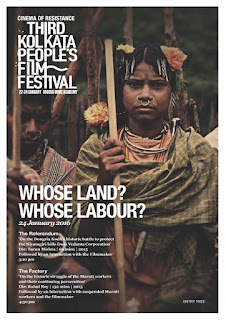 Our main theme on 23 January 2016. Here we will screen two documentaries made in 2015 which dwell on the questions of structural violence, memory and justice.

'On the Nellie massacre of 1983, a film exploring violence, memory and justice'

Dir: Subasri Krishnan | 52 mins | 2015
Followed by an interaction with the Filmmaker

'On the forced dissapearances in Kashmir, and memory as a political act'

Followed by an interaction with the Filmmaker 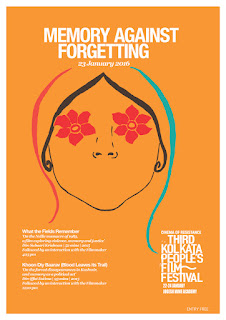 by Chaitanya Tamhane on 22nd January

by Aung Rakhine on 23rd January

(this is the first film made in Chakma language in Bangladesh, and has been denied a censor certificate there!)

by Gurvindar Singh on 24th January

(The first screening of the film in Kolkata)

YOUNG ADULTS SESSION
(we specially expect those in the age group 12-18 to attend although the session is open to all)
January 22, Friday 11 am to 1:30 pm
Registration: 10 am to 10:30 am
Open to audience of all ages. Free Entry. No tickets/passes required 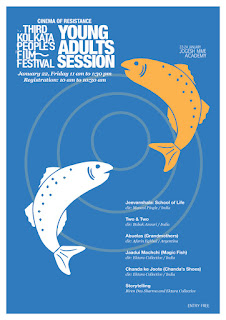 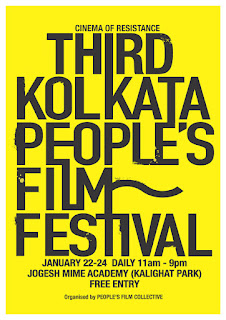 --
Pl see my blogs;
http://ambedkaractions.blogspot.in/
http://palashscape.blogspot.in/
Feel free -- and I request you -- to forward this newsletter to your lists and friends!
Posted by Palash Biswas at 6:51 AM