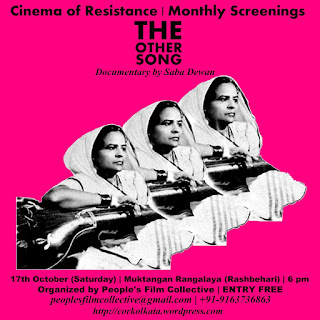 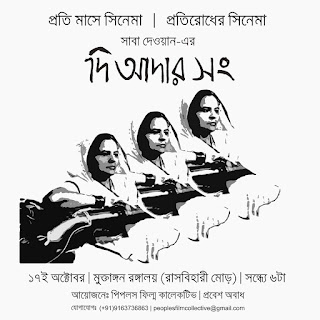 More than seventy years later the film travels through Varanasi, Lucknow and Muzzafarpur in Bihar to search for the forgotten song. This journey brings the film face to face with the enigmatic figure of the tawaif, courtesan, bai ji and the contested terrain of her art practice and lifestyle. To find the lost other song the film must understand the past and present of the tawaif and unravel the significant transitions that took place in late 19th and early 20th century around the control, censorship and moral policing of female sexualities and cultural expression.

SABA DEWAN writes about the making of THE OTHER SONG -

"Attempts at recasting sexual morality go deep in the political and cultural history of Benaras. They go back to the late 19th and early 20th centuries, when the city witnessed the rise of Hindu nationalism. Articulating the anxieties of a subjugated patriarchy, a major concern for the Hindu nationalists was the need to regulate existing female sexualities and control spaces of 'dangerous excess'. For the newly emerging Hindu nationalists, colonial morality ironically became the parameter by which they were to define and differentiate the 'moral' from the 'immoral'.

After the revolt of 1857, colonial authorities spared no effort to depict Indian princes as effete and profligate, steeped in decadent pleasures symbolised by the 'prostitute' tawaif. This period also coincided with the imposition by the colonial government of the Contagious Diseases Acts and other prostitution-related laws (see accompanying review by Rakesh Shukla). In the main, they branded tawaifs as 'common prostitutes' and pathologised their sexuality as 'diseased'. Internalising this Victorian moral code, nationalist discourse too seems to have cast the non-marital sexuality of the courtesan as 'devouring', and her arts as 'obscene'. It was argued that Hindu society needed to be cleansed of its degenerate practises, including the practice of patronising tawaifs, in order to regain back its stamina and vitality.

One of the issues taken up by Hindu-nationalist leaders of early 20th century was the demand that Hindi be declared the official language, as opposed to Urdu. During my research of Hindi pamphlets from the time, I came across a series of popular cartoons that presented the tawaif as 'Begum Urdu', the embodiment of the alien, exotic, untrustworthy, decadent, morally corrupt Muslim 'other' – in direct contrast to 'Mother Devanagari', the upper caste, respectable, honest and homespun mother of every true Hindu son.

This attack was coupled with the anti-nautch movement of early 20th century, which had a strong presence in Benaras. It attacked the tradition of holding 'nautches' (dances) by the upper classes and the open presence of tawaifs on public occasions. Demands were also made in various North Indian cities to change municipality laws so as to regulate the tawaifs' place of residence within certain specified areas of the city."

Hope to see a lot of you there! Please spread the word!
Zindabad!
People's Film Collective & Cinema of Resistance
Organizing team

ABOUT US: We organize an annual film festival, called the Kolkata People's Film Festival, in the third week of January. Throughout the year, we organize monthly film screenings in Kolkata and also travel in Kolkata and its neighbouring districts (such as North and South 24 Pargnas, Hooghly, Howrah, Birbhum, Nadia etc.) to screen films and hold discussions/dialogues on invitation from non-funded like-minded groups, unions and organizations. We are particularly interested in screening among workers, women, children and young adults, civil society groups and folks in general who are allies of people's movements.

--
Pl see my blogs;
http://ambedkaractions.blogspot.in/
http://palashscape.blogspot.in/
Feel free -- and I request you -- to forward this newsletter to your lists and friends!
Posted by Palash Biswas at 8:35 AM