Slowly and Steadily the Indian Intellectual are getting it. What is the real Problem of Nepal

Slowly and Steadily the Indian Intellectual are getting it. What is the real Problem of Nepal
Tilak Shrestha
-- Tribhuvan Ju, Jwajalapa!
Not really, this is not a correct analysis. To begin with there is no Nepalese analyst included in the discussion. This is merely Indian attempt at promoting Nepalese of Indian origin. It is not about inclusive politics of all Nepalese subgroups. All our political parties are aware of the imbalances and marginalization of many of our Nepalese sub-groups. They are working in their own ways, and through democratic process. You may see in the 'Samanupatic' or both President and Vice-President being Madheshi, or Speaker being a Limbu.
But the Jatiya Sanghiyata, or Ethnicity based Federal system is not the demand of people. There must be referendum for it. It came about due to Maoists strategy of fomenting Jatiya fights to impose Communism against Democracy. Unfortunately, it is aided by Euro-Churches to facilitate conversions and India to control internal affairs of Nepal. Is not it true that Maoists were supported by Indian?
Exactly, how Janajatis or Madheshis are marginalized? Which of our constitutions (Panchayat, 1990, Interim) discriminates? On the contrary all of them are distinctly against any kind of discrimination. Nepal is not made of majority and minority communities. We all are minorities, including Bahuns and Chhetris. Yes, some are much ahead and some are marginalized. But then, the process of including all does not come from Sanghiyata, but from - a. education, b. job / business diversity, and c. inclusive politics.
Does India use their own recipe? What about Gorkhaland movement? When in fact, the Hill Gorkhas and Plains Bengalese are much more distinct than in Nepal. Indian UP has over 200 million population, as compared to Nepal with about 25 millions (current 7 states). In that proportion, UP should be divided into over 55 states. Not to forget that India begun as over 500 rajyas in 1947, and Nepal has been 1 over 2 centuries.
The real issue is Nepalese people's wish. The issue of federal states 'Sanghiyata' was never discussed in the public. It is imposed through Maoists terror and foreign meddling. The issue must be discussed for public information and referendum conducted for mandate. Let informed Nepalese citizens decide. Otherwise, it remains imposed, without mandate and a treason against people.
Here is a sample of Indian attitude:
http://www.onlinekhabar.com/2015/09/329586/
Thanks, Tilak
On Fri, Sep 4, 2015 at 12:29 PM, Tribhuvan Tuladhar<tribhuvantuladhar@gmail.com> wrote:

Please listen to this interesting conversation between Indian Intellectuals who follow Nepal very closely. You will also learn a bit more from them where the real problem of Nepal Future lies.
As a matter of fact, to be candid, I know, We know, and many of us know, but there are a whole group of people who are hiding their head in the sand like an Ostrich and singing another tune that is totally irrelevant to the Future of Nepal and it People.

You must know by now about whom I am talking about. The experts in the group call them Hill Ruling Class and many a time they call them out as Bahun Chettris. I would not go so far, rhetorically,  but I would keep portion of the Chettri people on the side of of the victimized ones as the rest of the Nepalese people.
The problem people as mentioned in the clip are  - The Arya Brahmans, especially of the NC and the UML Class (not excluding Prachanda from the UCPN)

Let's learn more as the Truth Unveils itself. It is just the matter of Time.

The Time is not on the ruling Elite side for sure! 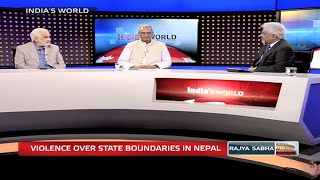 India's World - Violence over state boundaries in Nepal
Pl see my blogs;
http://ambedkaractions.blogspot.in/
http://palashscape.blogspot.in/
Feel free -- and I request you -- to forward this newsletter to your lists and friends!
Posted by Palash Biswas at 10:55 AM