Indian Express reports: Jhumpa Lahiri awarded National Humanities Medal by Barack Obama Indian-American Lahiri was presented with the medal yesterday in the East Room of the White House in the presence of luminaries from the field of arts and humanities.

Indian-American Lahiri was presented with the medal yesterday in the East Room of the White House in the presence of luminaries from the field of arts and humanities. 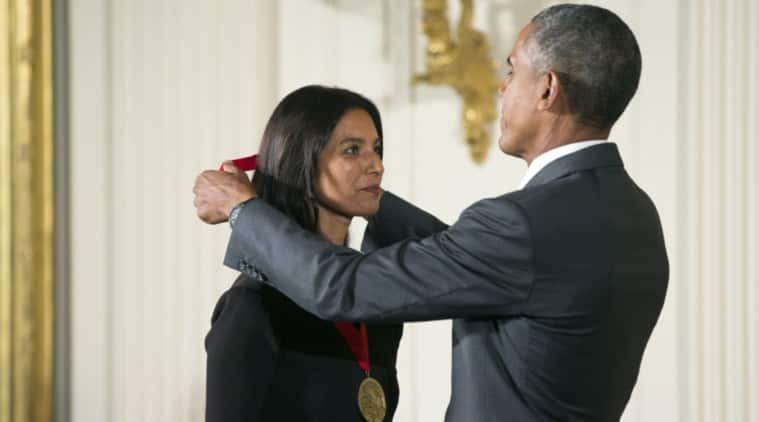 US President Barack Obama has presented the prestigious National Humanities Medal to Pulitzer Prize winner, Jhumpa Lahiri, in recognition of her "beautifully wrought narratives of estrangement and belonging" which highlight the "Indian-American experience".

Indian-American Lahiri was presented with the medal yesterday in the East Room of the White House in the presence of luminaries from the field of arts and humanities. First Lady, Michelle Obama, was also present during the ceremony.

"The 2014 National Humanities Medal to Jhumpa Lahiri, for enlarging the human story. In her works of fiction, Dr Lahiri has illuminated the Indian-American experience in beautifully wrought narratives of estrangement and belonging," the White House citation read.

Lahiri's parents and other family members were also present on the occasion.

Obama described the annual awards ceremony as his favourite White House event when "truly extraordinary artists and innovators and thinkers" are recognised for their brilliance while the rest of us look on and feel totally inadequate.

"They span mediums and methods. We have artists, actors, writers, musicians, historians, a landscape architect, and a chef. Without them there would be no Edible Schoolyard, no Jhumpa Lahiri novels, no really scary things like Carrie and Misery," the US President said amid laughter.

"They are versatile — poets and opera singers who were also master teachers at liberal arts colleges and Detroit public schools; philosophers who wrote novels. They are visual artists who work filling pages that spilled over to screens, three-dimensional gallery floors, and most of a New York City block," he added.

"And they all have one thing in common: They do what they do because of some urgent inner force, some need to express the truth that they experience, that rare truth. And as a result, they help us understand ourselves in ways that we might not otherwise recognise. They deepen and broaden our great American story and the human story," Obama said.

The first National Humanities Medal was awarded in 1996.

Since then, the medal has been bestowed upon 163 individuals and 12 organisations, including this year's recipients.

- See more at: http://indianexpress.com/article/world/americas/jhumpa-lahiri-awarderd-national-humanities-medal-by-barack-obama/#sthash.qswvbSst.dpuf
Pl see my blogs;
http://ambedkaractions.blogspot.in/
http://palashscape.blogspot.in/
Feel free -- and I request you -- to forward this newsletter to your lists and friends!
Posted by Palash Biswas at 7:21 AM