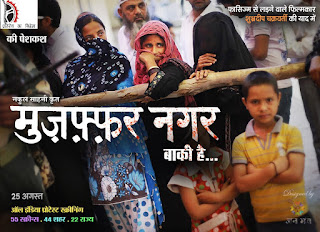 August 25
6 pm
Post-screening, we will have representatives of the protesting FTII students interact with us and add to our conversation over the film and our times.

Please reach in good numbers, spread the news and defeat the fascist forces trying to muzzle the voices of truth, justice and dissent.

For more detail please check our full approach statement below, and our facebook page - 'Cinema of Resistance'.

On August 1st 2015 members of the Akhil Bharatiya Vidyarthi Parishad exhibiting habitual hooliganism forcefully stopped the screening of Nakul Singh Sawhney-directed documentary, 'Muzaffarnagar Baaqi Hai..' at Delhi's Kirori Mal College. Videos witnessing this incidence of violent disruption of the screening can be seen in Facebook, Twitter and other social media.

'Muzaffarnagar Baaqi Hai…' is a documentary film that quite courageously reveals the conspiracy of the ruling class political parties which deliberated communal massacres to grab political power by-hook-or-by-crook, in their opportunist alliance with the new lumpen capitalist and feudal forces in the society during August-September 2013 in Uttar Pradesh. This documentary is significant in the times when the media, co-opted by the crony capitalist corporate forces, has turned into a fabrication machine than being the fourth pillar of democracy supposed to project truth and reality.

Narendra Dabholkar, veteran activist who fought vigorously against superstitions was brutally murdered in 2013. Artists of Kabir Kala Manch were put behind bars because their songs were considered seditious! In 2015, comrade Govind Pansare who ferociously blew away communal iconization of Shivaji, was assassinated in the daylight. Teesta Setalwad and Sanjeev Bhatt are continuously being framed and cornered by the state machinery. The same city of Pune where the innocent Mohsin Sheikh was lynched for wearing markers of his faith, also witnessed disruptions during the screening of documentary filmmaker Anand Patwardhan's iconic film, 'Ram ke Nam'. While the Ambedkar Periyar Study Circle faced a ban at IIT Madras; Tamil writer Murugan had to declare the 'writer' in him 'dead' under fascist pressures. Without any evidence an intellectual and teacher like G. N. Saibaba was incarcerated in Nagpur jail in precarious health conditions. FTII students struggling for their democratic rights were arrested at midnight and every force is used to try and crush their movement. Debaranjan Sarangi, a filmmaker and human rights activist from Odisha was framed with false charges. And on the other side killers associated with the Ranveer Sena and Bajrang Dal - who boasted of massacres on camera - were let go scot-free and let out on bail respectively. What do all these country-wide incidences suggest?

It appears that there has been a torrent of such incidences as mentioned above. Many a time we don't even get the information of prevalence of such repressions in different corners in India. It is possible to bring them in light only by building strong and united resistance against these dark times. This is precisely the reason why Cinema of Resistance does not look at incidence of muting 'Muzaffarnagar Baaqi Hai..' at Kirori Mal as an isolated incidence, rather it is observed as a dangerously fascist tendency that strangles the democratic spirit. Strong, committed resistance even by putting our lives at stake is the only possible mechanism to impede this trend. We take immense pleasure to share with you that this appeal of ours to respond by arranging countrywide protest screenings was welcomed from various corners of the country and till this date we are informed that this protest will be organized in 22 states, 50 cities/towns and with more than 60 screenings.

We appeal to all progressive and democratic spirited citizens, artists, and intellectuals, to expose fascist forces in this country by joining hands in this campaign of protest-screening of Nakul Singh Sawhney's film 'Muzaffarnagar Baaqi Hai…' on August 25th, 2015.

ENTRY FREE AND OPEN TO ALL

ABOUT US: Cinema of Resistance (Kolkata Chapter) organizes an annual film festival, called the Kolkata People's Film Festival, in January. Throughout the year, we organize monthly film screenings in Kolkata and also travel in Kolkata and its neighbouring districts (such as North and South 24 Pargnas, Hooghly, Howrah, Birbhum, Nadia etc.) to screen films and hold discussions/dialogues on invitation from non-funded like-minded groups, unions and organizations. We are particularly interested in screening amongst workers, women, children and young adults, civil society groups and folks in general who are allies of people's movements.

To organize a show in your locality please write to cor.kolkata@gmail.com, or leave a message at 9163736863. We will get back to you.

To join our initiative, please contact us in the manner above, or simply turn up at one of our screenings for a face-to-face chat! 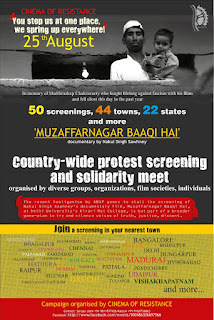 (A) On the country-wide protest day, 25th August

(B) On other days around 25th August

Pl see my blogs;
http://ambedkaractions.blogspot.in/
http://palashscape.blogspot.in/
Feel free -- and I request you -- to forward this newsletter to your lists and friends!
Posted by Palash Biswas at 8:12 AM