Letter of Farmers to Prime Minister

Samyukt Kisan Morcha has sent a letter to Prime Minister reminding him of their pending demands. The letter is as under: 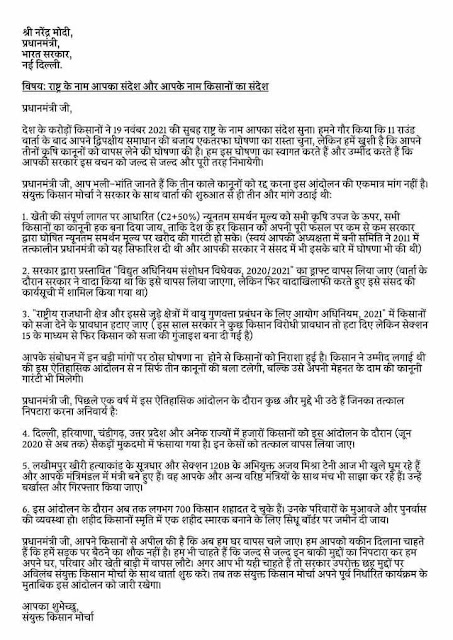 Crores of farmers of the country heard your address to the nation on the morning of 19th November 2021. We noted that after 11 rounds of talks, you chose the path of unilateral declaration rather than a bilateral solution; nonetheless, we are glad that you have announced the decision to withdraw all three farm laws. We welcome this announcement and hope that your government will fulfill this promise at the earliest and in full.

Prime Minister, you are well aware that repeal of the three black laws is not the only demand of this movement. From the very beginning of the talks with the government, the Samyukt Kisan Morcha had raised three additional demands:

1. Minimum Support Price based on the comprehensive cost of production (C2,0%) should be made a legal entitlement of all farmers for all agricultural produce, so that every farmer of the country can be guaranteed at least the MSP announced by the government for their entire crop. (The Committee formed under your Chairpersonship had made this recommendation to the then Prime Minister in 2011 and your government had also announced about this in the Parliament).

2. Withdraw the draft Electricity Amendment Bill 2020/21 proposed by the government ( During the talks, the government had promised that it would be withdrawn,  but in a breach of promise, it was included in the Parliament's agenda).

3. Remove the penal provisions on farmers in the "Commission for Air Quality Management in the National Capital Region and Adjoining Areas Act 2021" (This year, the government removed some anti-farmer provisions but again through section 15, possibility for penal action against farmers has been brought back).

The farmers have been disappointed due to lack of concrete announcement on these important demands in your address. The farmers had hoped that through this historic movement, not only would the three laws be averted, but they would also get a legal guarantee of remunerative MSP for their hard work.

Prime Minister, during this historic movement in the last one year, some other issues have also arisen which need to be resolved immediately:

4. Thousands of farmers have been implicated in hundreds of cases during this movement (June 2020 till date) in Delhi, Haryana, Chandigarh, Uttar Pradesh and several other states. These cases should be withdrawn immediately.

5. Ajay Mishra Teni, the mastermind of Lakhimpur Kheri murder case and accused of section 120B, is still roaming freely and remains a Minister in your cabinet. He is also sharing the stage with you and other senior ministers. He should be sacked and arrested.

6. During this movement, so far about 700 farmers have given their lives to the cause, as their supreme sacrifice. There should be compensation and rehabilitation support for their families. To build a martyrs' memorial in the memory of the martyr farmers, land should be given at Singhu Border.

Prime Minister, you have appealed to the farmers that now we should go back home. We want to assure you that we are not fond of sitting on the streets. we too desire that after resolving these other issues as soon as possible, we return to our homes, families and farming. If you want the same, then the government should immediately resume talks with the Samyukt Kisan Morcha on the above six issues. Till then, the Samyukt Kisan Morcha will continue this movement.

Posted by mediavigil at 3:57 PM