Samyukt Kisan Morcha (SKM) -United Farmers Front-has welcomed the announcement of the Prime Minister on the issue of repeal of the three black farm laws on 19 November. Prime Minister said, "Today, I apologize if some farmers did not understand what we wanted to do through the farm laws. We have decided to repeal the three farm laws. We will withdraw all these three bills in the upcoming Parliament session ". 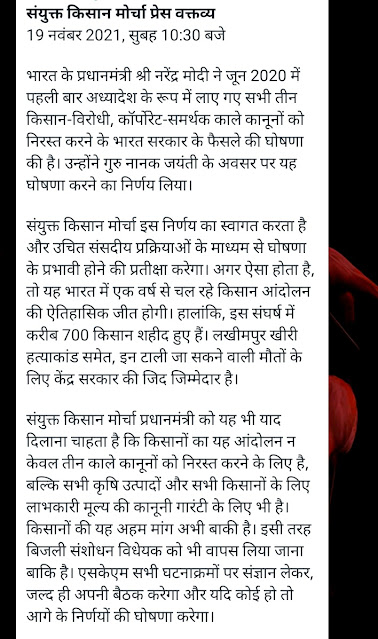 It is significant that the announcement was made supposedly on the occasion of Guru Nanak's Prakash Utsav that celebrates first Sikh guru, Guru Nanak. Guru Nanak, the founder of Sikhism, was born in 1469 in Rai-Bhoi-di Talwandi in the present Shekhupura district of Pakistan, now Nankana Sahib.
American Sikh Council has reacted saying,  "We appreciate the news on the ongoing Indian Farmers protesting the Black Laws enacted...." Kavneet Singh of the American Sikh Council has informed that "The founder of the Sikh Religion was born on 1 Vasakh which is April 14, and this the correct date and is being celebrated appropriately. Just because some Sikhs continue to celebrate the occasion on the wrong date does not make it right..." Government of India ought to update it's calender to reflect the correct date of Guru Nanak's birthday.
It is also significant that November 19 is the birthday of late Prime Minister Indira Gandhi who assassinated in October 1984 by her body guards amidst agitations and violence in Punjab.
Prime Minister Narendra Modi also announced the formation of a committee to promote zero budgeting based agriculture, to change crop patterns as per the changing needs of the country and to make Minimum Support Price (MSP) more effective and transparent. The Committee will have representatives of the central government, state governments, farmers, agricultural scientists, and agricultural economists.
SKM reacted saying they "will wait for the announcement to take effect through due parliamentary procedures. If this happens, it will be a historic victory of the one year long farmers' struggle in India. However, nearly 700 farmers have been martyred in this struggle. The central government's obstinacy is responsible for these avoidable  deaths, including the murders at Lakhimpur Kheri. Kisan Ekta Morcha." SKM also reminded the Prime Minister that "the agitation of farmers is not just for the repeal of the three black laws, but also for a statutory guarantee of remunerative prices for all agricultural produce and for all farmers. This important demand of farmers is still pending. So also is the withdrawal of the Electricity Amendment Bill. SKM will take note of all developments, hold its meeting soon and announce further decisions."
While SKM has given a measured reaction, the announcement is being seen as a historic victory, a lesson for all the peoples' struggles in our country and across the globe. It is the fourth major defeat for the authoritarian laws.
First, it was compelled to freeze Land Acquisition,& Resettlement (Second Amendment)Bill, 2015 that aimed to dilute the 2013 law which replaced 1894 colonial law because of the protest movement by Bhoomi Adhikar Andolan.
Second, it was forced to stop implementation of biometric National Population Register (NPR) part of UID/Aadhaar Number project under Citizenship Act because of massive protests across the country.
Third, PM forced to apologize and announce the repeal of three Farm laws because of history's longest farmers protest at Delhi borders for one year after the sacrifice of some 700 farmers. Indian State wanted the right to be absent for protection of farmers and citizens. 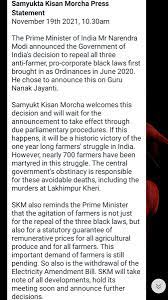 Fourth, government was forced to withdraw the Financial Resolution and Deposit Insurance (FRDI) Bill, 2017 due to a movement lead by All India Bank Employees' Association (AIBEA), All India Bank Officers Confederation (AIBOC) and Bank Employees Federation of India (BEFI). Now the government is trying to reintroduce the Financial Resolution and Deposit Insurance (FRDI) Bill 2017, in the guise of Financial Sector Development and Regulation (Resolution) Bill (FSDR) 2019.
Because of the withdrawal of the FRDI Bill from the Lok Sabha, bank depositors and account holders heaved a sigh of relief because their deposits will no longer be used to bail out failing institutions as was proposed. The government may do something similar in the matter of farm laws.
These laws were brought as a quid pro quo under the influence of anonymous donors and their electoral bonds which have been legalized through amendments in the Companies Act, 2013. The constitutional challenge against the amendment is pending before the Supreme Court. The case against farm laws is also before the court.
Farmers have been demanding passage of The Farmers Freedom from Indebtedness Bill 2018” and “Farmers’ Right to Guaranteed Remunerative Minimum Support Price for Agricultural Commodities Bill 2018". Their demand has received support from a total of 21 political parties so far.

Posted by mediavigil at 6:09 PM