Here again I share the Nepalese point of view on Economic Blockade!

Here again I share the Nepalese point of view on Economic Blockade!

We have been dealing withe the Nepalese dilemma and have been trying to get reports form grass roots so that we may draw the attention of Indian citizens and the policy makers as well to ensure that we should not lose our most intimate friend,the part of our heart and soul.
Here again I share the Nepalese point of view on Economic Blockade!

Posted by The Himalayan Voice:
[With his rhetoric of 'neighbourhood first', deeper connectivity, free trade, 'shared prosperity', the SAARC satellite project coupled, significantly, with his quest for a more devolved federalism - which he calls 'cooperative federalism' - signaled revived hopes of dynamic sub regional cooperation within SAARC.]
By Madhukar SJB Rana* 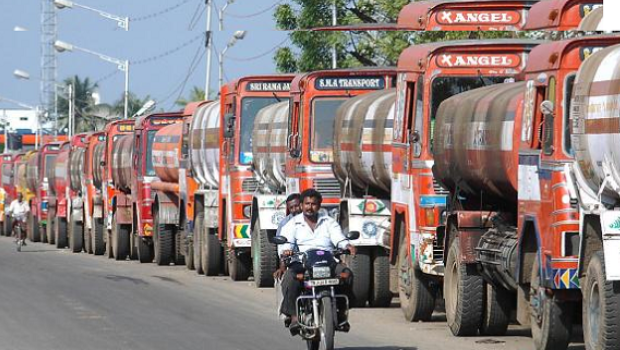 We had hoped and wished that PM Modi would enunciate a new regional doctrine for South Asia. A doctrine that would be more proactive than the 'Gujral doctrine' of 1996: when PM Gural sought to give dynamism to the mostly defunct South Asian Association for Regional Cooperation (SAARC) with non reciprocal tariff concessions and stress on subregion cooperation between Bangladesh, Bhutan, India and Nepal.
A new dawn was envisioned by South Asians with the grand invitation to all SAARC leaders to attend his  inauguration as Prime Minister of India, which they gladly did.
With his rhetoric of 'neighbourhood first', deeper connectivity, free trade, 'shared prosperity', the SAARC satellite project coupled, significantly, with his quest for a more devolved federalism - which he calls 'cooperative federalism' - signaled revived hopes of dynamic sub regional cooperation within SAARC.
Alas this is not to be as the economic blockade of Nepaldemonstrates: it's back to the (Sardar KM) 'Panikker doctrine' where South Asia is to be visualised as its exclusive sphere of influence with the added fanciful diplomatic toppings like reference to 'special relations'.
'Special relations' was predicated on parameters such as open border; free labour movement; matrimonial relations between Terai dwellers, the Marwari business community and the Nepalese aristocracy; recruitment of Nepalese into the Indian Gurkha regiments, and Hinduvta.
Yes, indeed, Modi has talked of BBIN which is a new name for SAGQ (enunciated in 1996 by Nepal pursuant to the Gujral doctrine) or SASEC --the ADB's version of the very same concept. Given the real politic of the latest economic blockade on Nepal, it is now wondered whether his BBIN concept is nothing more than Vajpayee's policy of regionalism through 'enlightened bilateralism'.This obnoxious policy is totally against the spirit of regionalism.
It seeks for India this strategy: to take advantage ofIndia's asymmetrical relations with its immediate neighbours against the geographical background that none of the 8 neighbours, except Afghanistan, share common borders with each other. Hence India would deal with each bilaterally and, in the process, give calibrated birth to regional and sub regionalism.
The first ever MOU signed between Nepal and China will go down in history as a veritable turning point. It will not only have ended the Indian monopoly but, significantly, opened both transit and overland trade between Nepal andChina. A huge boost to China's grand vision of One Road One Belt will be another outcome.
It's geo psychological significance lies in Nepal being able to diversify its international trade and, sooner than later, being in a position to pursue more self reliant economic policies when it frees itself from the informal 'currency union' with India.
Without the end of the 'currency union' Nepal will not be in a position to have a vibrant exports, industrialisation and our own interest rate policy. It will also immediately boost by leaps and bounds the sectors such as health, education, printing and publishing while giving a productive outlet to the real estate investors to go into other sectors. Entrepreneurship and SMEs will flourish and help bring back our human capital from overseas.
It also lies in the vital fact that our entire political top leadership is coming to grips with being 'India locked' and thus move away from the Indian patronage upon it for the last 50 or more years which has cost the national interest dearly.
The MOU is to be a framework agreement allowing both the state and private traders to be engaged in fuel supply. By virtue of the private sector being allowed to be engaged in strategic supplies of POL products, a highly significant development is that Nepal will have greater competition and efficiency: and better governance, as the state monopoly is to be ended. So too will acute graft and corruption in the body politic oiled by this sector.
In 2005, when I was Finance Minister, a plan of action was prepared by the Ministry of Finance and the then CEO of Nepal Oil Corporation (NOC) which deserves a revisit by the Oli government.
This proposal sought to allow the private sector to import POL products from wherever they found it profitable. Additionally, it desired that the NOC procurePOL products from the IOC but hand it over, at the border, to the 5 private sector firms who were required to store, distribute and retail in each of the 5 development regions.
The practice of having a national POL price, based on CIF Kathmandu, would be ended in favour of landed cost plus transportation and storage expenses on a regional basis.
NOC would in this scenario take up two new roles, namely (a) serve as the POL Cost, Price, Quality and Competition Regulating Body, and (b) serve as the national buffer stocking agency to deal with supply crises.
Finally, it was anticipated that within a few years the regionally- licensed private sector would be able to operate and compete nationally in one modernised national market duly aligned to the global market fully owning their own transportation means along and their own storage and retailing outlets. Supplies to remote areas would be subsidised directly by the State thus ending the old inefficient practice of cross subsidisation.
* The author is Professor of Economics at South Asian Institute of Management, Kathmandu and is Former Finance Minister of Nepal.
http://ambedkaractions.blogspot.in/
http://palashscape.blogspot.in/
Feel free -- and I request you -- to forward this newsletter to your lists and friends!
Posted by Palash Biswas at 7:29 AM