Say NO to India-Japan Nuclear Agreement! Protests planned across India ahead of Japanese PM's visit.

During the Japanese Prime Minister Mr. Shinzo Abe's visit to India, protests have been organised against the proposed India-Japan Nuclear Agreement between 11th to 13th December.

Protests have been announced all over India during Shinzo Abe's visit this week. Farmers and fisherfolk whom this deal directly and immediately affects would be protesting in Jaitapur, Mithi Virdi, Kovvada and Koodankulam. Solidarity groups have also called for protests in Delhi, Kolkata, Chennai, Bangalore, Nagpur, Mumbai, Hyderabad, Ahmadabad and other cities.

​Protests by civil society groups are also being organised in New York, London, Tokyo and other international cities, as this nuclear agreement has serious international implications. 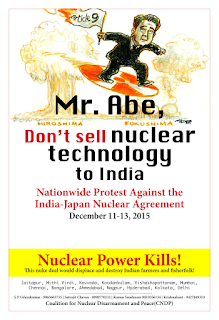 ​The deal with Japan is actually a missing piece in the massively destructive nuclear energy expansion that India has embarked upon after signing the disastrous Indo-US nuclear deal. The nuclear projects of America and France in Gujarat's Mithi Virdi, Andhra Pradesh's Kovvada and Maharashtra's Jaitapur cannot proceed without an India-Japan deal, as these designs use crucial components supplied by Japan.

It's important to oppose this agreement as it unleashes an insane and irreversibly destructive nuclear expansion, imposed through brutal repression and denial of local democracy. These projects are being strongly opposed on the ground by farmers and fisherfolk as they displace hundreds of thousands of people and endanger their safety and environment. Several eminent independent experts and former policy makers have also risen it protest highlighting the specific hazards of the new designs, the shoddy environmental clearances issues under political pressure, the lack of transparency and accountability in the nuclear sector, the non-independence of India's nuclear regulator and the insistence of the foreign suppliers for not complying with the Nuclear Liability Act passed by the Indian parliament. After Fukushima, a number of countries have shifted away from nuclear energy and international commitments like this deal to import nuclear technology actually distort India's sovereign energy choices.

People in Japan are also opposing this agreement for the sheer absurdity of Mr. Shinzo Abe selling nuclear technology to other countries even as ongoing nuclear accident in Fukushima takes a turn for the worse. We urge you to lend your support to this urgent cause and stop the India-Japan nuclear agreement that would push the country into a destructive spiral.

Here is the e-petition that more than 1100 people have already signed. Please sign and circulate.

Exporting Nuclear Technology after Fukushima is Immoral!
It would unleash destruction on the Indian poor!
Modi's dilution of Nuclear Liability would make more Bhopals in India!!
The nuclear deal with Japan legitimizes and boosts India's nuclear weapons!
It fuels arms race and militarism in Asia!
Nuclear commitments to foreign countries distort India's energy priorities!
--
Pl see my blogs;
http://ambedkaractions.blogspot.in/
http://palashscape.blogspot.in/
Feel free -- and I request you -- to forward this newsletter to your lists and friends!
Posted by Palash Biswas at 1:14 PM