Dear friends,
Thanks to all of you who came down on November 14th!

People's Film Collective welcomes you to our upcoming film screenings and discussion on December 6 in order to continue to probe the question of assault on the rationalist tradition in the subcontinent, that has taken a brutal and bloody turn of late yet again. These screenings and discussions are also a part of our attempts to understand how the rightwing forces have been spreading their ideology through grassroots cultural and pedagogic initiatives.

We attach below the poster for the screenings of Dec 6th. Please note the new venue this time.

Hope to see a lot of you there! 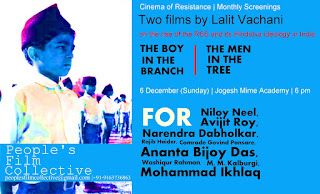 THE BOY IN THE BRANCH

"The Branch is the Life of the Rashtriya Swayamsevak Sangh"
(Mohan Bhagwat, RSS leader)

Set at the RSS headquarters in Nagpur, India, 'The Boy in the Branch' is a film about the indoctrination of young Hindu boys by the Rashtriya Swayamsevak Sangh (the RSS), India's foremost Hindu fundamentalist organization. Juxtaposing the activities of two different RSS 'shakhas' or branches, the film documents the stories and the games, the rituals and the play that socialize the young RSS recruit.

THE MEN IN THE TREE

The sequel to 'The Boy in the Branch', the film revisits the RSS, a Hindu right-wing organization in India after a gap of eight years. Vachani returned to Nagpur to meet the characters from his earlier film. At one level, this is a film about memory. It is a documentary in the form of a personal revisit where a filmmaker returns to the issues, the locations and the subjects of an earlier film. At another level, The Men in the Tree is a political documentary on the RSS and Hindu fundamentalism. It is about some of the individuals, the stories and the myths, the buildings and the branches that enable the growth of the RSS and its Hindutva ideology.

ABOUT US: We organize an annual film festival, called the Kolkata People's Film Festival, in the third week of January. Throughout the year, we organize monthly film screenings in Kolkata and also travel in Kolkata and its neighbouring districts to screen films and hold discussions/dialogues on invitation from non-funded like-minded groups, unions and organizations. We are particularly interested in screening among workers, women, children and young adults, civil society groups and folks in general who are allies of people's movements.

To organize a show in your locality please write to peoplesfilmcollective@gmail.com, or call us at 9163736863. We will get back to you.

To join our initiative as an activist, please contact us in the manner above, or simply turn up at one of our screenings for a face-to-face chat!
--
Pl see my blogs;
http://ambedkaractions.blogspot.in/
http://palashscape.blogspot.in/
Feel free -- and I request you -- to forward this newsletter to your lists and friends!
Posted by Palash Biswas at 7:30 AM