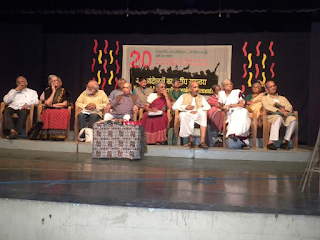 Dr B D Sharma : A Life Lived in Struggle for the Rights of Marginals

New Delhi, December 7 : Dr Brahma Dutt Sharma (known to many of us as Dr Sahab), left for passed away on December 6th in Gwalior. He was not keeping well for sometime and was being looked after by his son and daughter-in-law. Narmada Bachao Andolan and NAPM pay its heartfelt condolences to the family and to the Andolan Biradari, of which he was an integral part.

He led many battles in his life and worked tirelessly to achieve the constitutional rights of the adivasis, dalits, workers and farmers, over five decades of his working life beginning with the troublesome days in Bastar (1968) and being the last Commissioner for Scheduled Castes and Scheduled Tribes (1986-1991). He also served as the Vice Chancellor of NEHU, Central University and in numerous committess of Planning Commission and National Advisory Council.

He was a bureaucrat, a contemporary of late S R Sankaran, B N Yugandhar and others who stood for the people, just a way government servant should. As SC/ST Commissioner, he not only authored seminal reports on empowerment of SC/STs but also played a key role in authorship of the Bhuria Committee report, enactment of PESA and Forest Rights Act. As Secretary in the Minister of Tribal Affairs, he initiated the idea of Tribal Sub Plan. Untill as late as 2014, he continued to collaborate and help Government in its various initiatives with the tribals and adivasis, but also challenged them on every front, for their continued betrayal and non-implementation of various plans and governance failure in the scheduled areas.

He was extremely disturbed by the violence and war like situation in the tribal areas, and in a letter, dt May 17, 2010 to the President of India, he wrote :

I am constrained to state at this critical phase of the history of tribal people that the Union Government is guilty of abdicating its Constitutional responsibility by allowing the situation to degenerate from that of stray revolts in 1960s to 'warlike situation' at the moment. It has remained unconcerned with the simmering discontent from day one with the adoption of the Constitution. It has not issued a single direction to any State in 60 long years. You as head of the nation, at a critical time must ensure that the Union Government accepts unequivocally its Constitutional responsibility with due apologies for the decimated, shattered and disinherited tribal communities whose irretrievable loss- physical, economical and emotional - is an un-washable blot on the fair face of our nation that still stands by equity and justice.

He stood for the rights of the people, for implementation of the self rule in the Gram Sabhas as mandated by the Constitution and championed the cause of the Hamare Gaon me Hamara Raaj. Even while serving as the SC/ST Commmsioner, he filed the first case in the Supreme Court, demanding the implementation of the Narmada Water Dispute Tribunal (NWDT) award. SC ordered the implementation of the NWDT award by the governments, which paved the way for allotment of land for land to thousands of the project affected families. Unfortunately violating the SC order and order of numerous Tribunals and Commissions and in face of continued struggle of Narmada Bachao Andolan, the NDA government is pushing ahead the construction of the Sardar Sarovar Dam, leading to submergence of nearly 2 lakh plus people in the Narmada Valley.

Dr Sharma was a visionary and was troubled by the growing inequity in the society in the wake of the neo liberal reforms pushed by the government. He worked tirelessly to implement the laws, policies, programmes and schemes of the government using all the means available with him, but he knew the real swaraj will come only if people themselves organized and fought for it and took control of their own life, means of livelihood, control over natural resources, had a say in the development plan and became a beneficiary in the process of development. He founded Bharat Jan Andolan and lent his voice and support to Narmada Bachao Andolan, National Alliance of People's Movements, Kisani Pratishtha Manch, Campaign for Survival and Dignity and many more people's struggles and movements.

He travelled through out the country and propagated his views and solutions to the farmers and workers distress, advocated for their rights and kept stressing the fact that we are headed towards a agrarian crisis and something which stemmed from the fact that farmers and workers were not getting their due. They were not being compensated for their efforts and hard work. He would often ask at the gatehrings, bata mere yaar, meri mehnat kaa mol hai kya ?

He wrote extensively and also published for which he set up his publishing unit, Sahyog Kutir Prakashan. He lived frugally and minimally, travelled across the country as a simpleton, wearing his dhoti kurta and remained accessible to every one. Even when he was not keeping well, he joined us all at the completion of 20 years of NAPM at its biennial convention in Pune, last year.

He will be missed for his courage of conviction and dedication to the cause of the marginalized. In his death we all have lost a great teacher and a comrade, who was always there for us in times of crisis and in struggle.

--
Pl see my blogs;
http://ambedkaractions.blogspot.in/
http://palashscape.blogspot.in/
Feel free -- and I request you -- to forward this newsletter to your lists and friends!
Posted by Palash Biswas at 9:20 PM