Now ,I am afraid that the RSS governance has set KSHMIR on fire and it seems as Kashmir situation worsens as planned,RSS would certainly accomplish its agenda within 2020.

On Thursday, separatists and other organizations had called people to protest against the beef ban and had termed the court order as "interference into the religious matters". 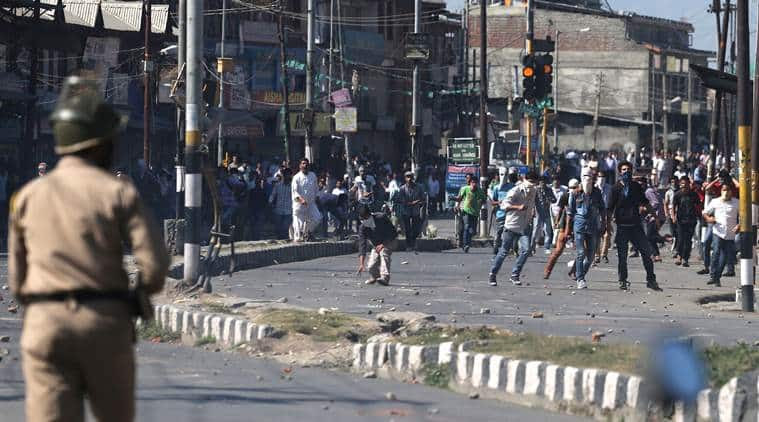 Protests erupted across valley on Friday against the high court order directing the administration to enforce a strict ban on the sale of beef in the state. Angry protesters at several places defied the High Court order and slaughtered bovines.

On Thursday, separatists and other organizations had called people to protest against the beef ban and had termed the court order as "interference into the religious matters". The beef ban sparked strong reaction from separatists and both the factions of Hurriyat Conference called for a shutdown in the Valley on Saturday against the ban. Locals said that at least six people sustained injuries when protesters clashed with the police in Pulwama town. Locals alleged that police fired pellets on the protesters who were protesting against the beef ban in the town soon after Friday prayers.

Hurriyat leader Shabir Shah led a protest rally against the beef ban in Pulwama. Later, a bovine was also slaughtered there. Shah asked J&K chief minister, Mufti Mohammad Sayeed to break his alliance with the BJP as they are using every tactic to harm Muslims. As Shah was addressing the people, Police swung into action and clashed with the protesters. At least six people were injured when police used cane charge to disperse the protesters.

Protests against the beef ban were also held in Tral, Khudwani, Anantnag and Kulgam towns of South Kashmir. In Anantnag town, protesters clashed with police after the Friday prayers. Outside the city's Grand Mosque – Jamia Masjid, people took to streets against the ban. Protesters also waved Pakistani flags.

Police arrested several leaders of Hurriyat Conference (G) after tried to take out a protest rally against beef ban in city's Lal Chowk.

Meanwhile, Kashmir University has postponed all the exams scheduled for Saturday.

On Wednesday, the Jammu and Kashmir High Court ordered the Director General of Police (DGP) to strictly enforce the sale of beef across the state. The directions, which came from a division bench of Justice Dhiraj Singh Thakur and Justice Janak Raj Kotwal over a public interest litigation filed by advocate Parimoksh Seth, followed the observation that "the Divisional Commissioner, Kashmir, has not filed an appropriate response regarding the smuggling and slaughtering of bovine animals and subsequently their sale in Kashmir Valley''.

The slaughter of bovines and sale of beef is banned in Jammu and Kashmir since the pre-Partition era when the then princely state was ruled by the Dogra rulers. In the Dogra era, the ban was strictly enforced across the state, after elected governments took over; there was a relaxation in the sale of beef. While the slaughter of bovines and the sale of beef were strictly banned in the Hindu majority areas of Jammu, beef was sold at many places in Muslim majority Kashmir.

- See more at: http://indianexpress.com/article/india/india-others/jk-violent-protest-erupts-in-valley-after-hc-ban-on-beef/#sthash.9ijdwBUU.dpuf
Pl see my blogs;
http://ambedkaractions.blogspot.in/
http://palashscape.blogspot.in/
Feel free -- and I request you -- to forward this newsletter to your lists and friends!
Posted by Palash Biswas at 11:33 AM