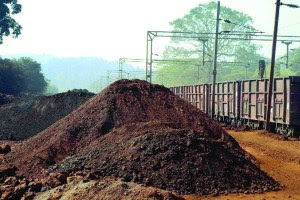 Independence Day, Herald supports the movement to ensure that we the people owe the minerals we mine and profit entirely from it rather than the mining companies. Even if no mining takes place, if we can recover the amount mining companies have earned due to " illegal mining" and accrue all the profits into a permanent fund. The interest from the amount can be directly transferred to the accounts of all permanent residents of Goa ( after a criteria defines them specifically). If mining does start, Mining companieswill be mere contractors and will be paid a fee for excavating. The state will earn the profits of the entire sale. This plan will naturally suit the big daddy mining companies. Nor will it suit those in government whose politics and governance been funded entirely by mining companies. But in the hands of a revolutionary government with peoples interests at heart, even this is possible. Do read how.

Team Herald There is a way to survive and survive well without mining. And there is a way for everyone who permanently lives in Goa to earn at least Rs 10,000 a year and for a family to earn Rs 50,000 a year. From 2004 to 2012 ( the period when mining stabilized and boomed in Goa), Rs 54,000 crore was the balance left after deducting extraction expenses from the total sale of iron ore.

While Rs 19,000 crore of this amount went to the centre in taxes and Rs 33,000 crore went to mining companies, leaving just about Rs 2000 crore which came as royalty, this entire amount of Rs 54,000 crore could have been ours if the principle of mining was changed or changed to make we the people the owner of our resources.

If this amount was put into a permanent " Goenchi Mati Permanent Fund" or " GMPF" and even if an interest of 3% accrued from this annually, we would have been left with Rs 1500 crore, without any mining company paying any royalty.

If this amount was distributed among 15 lakh permanent residents of Goa, each person would get Rs 10,000 a year or each family ( with 5 members) would get Rs 50,000 a year. Remember, if no further mining takes place in Goa. In the event of even 10 percent of mining taking place with 5 million tonnes of export instead of 50 million tonnes, the final amount each year to each one of us would also increase.

HOW WE CAN STILL GET A MINIMUM OF RS 54,000 CRORE The good news is that exactly the same amount can still be recovered through a different route According to the Mines and Minerals Development Regulations Act ( Section 21( 5) of the MMDR Act, 1957) a full recovery of the value of minerals is required when illegal mining takes place. And Rule 64A of the Mineral Concession Rules 1960 requires simple interest of 24% to be added to the recovery amount.

The value of the minerals exported only during 2007- 2012 ( declared by the Supreme Court as a period when all mining was illegal) during this period works out to Rs 54,000 cr, net of royalty received. ( remember since this is illegally mined ore, no extraction cost is due to any mining company) IF WE RECOVER COST OF ILLEGALLY EXPORTED ORE WE GET Rs 54,000 crore ( and earn out of its interest) IF WE RECOVER COST PLUS INTEREST OF ILLEGAL MINING WE GET RS 1,07,603 CRORE ( and earn out of its interest)Simple interest up to March 31, 2014 works out to an additional Rs 53,603 crore. The total works out to Rs 1,07,603 crore, around 10 times the annual State budget! It is the Government's constitutional duty as a public trustee to recover these amounts.

So each family of five will get ` 50,000 upto ` 1,00,000 per year Conclusion: Your fish curry rice and basic expenses will be taken care Contd on page 14 >> A people's movement can get us this money There should be and will be a people's movement to get this money back. The real story of how our mineral wealth has been captured by mining companies, should be told in each village and town. In schools and colleges. If we recover and legally live off this money, we don't need anyone's help to survive.

Herald's figures are have a perfect basis. If any mining company or group or individual chooses to oppose or challenge it please do so.

We shall be happy to publish your challenge and our response.

( Acknowledgement: The research on this subject was done by domain experts Raul Basu & Claude Alvares for Goa Foundation)

--
Pl see my blogs;
http://ambedkaractions.blogspot.in/
http://palashscape.blogspot.in/
Feel free -- and I request you -- to forward this newsletter to your lists and friends!
Posted by Palash Biswas at 11:47 AM