Samyukta Kisan Morcha (SKM) held a meeting as planned earlier at Singhu Morcha on the 366th day, of the farmers' protest. SKM took cognizance of the lack of response from the Prime Minister in reference to its letter dated November 21st, 2021, and called upon the Government to restart the dialogue process, and discuss the still pending issues.

The Morcha has condemned the Government's attempts to bypass bilateral discussions, and sidestep crucial issues. "In a democracy, it is the duty of the elected government to consult the protesting farmers and resolve the disputes amicably”, said SKM.

After the Prime Minister's announcement regarding the repeal of the three farm laws, and the Cabinet clearing the same, the Morcha has suspended its Tractor March program scheduled from November 29th, for the while. Samyukta Kisan Morcha reiterated its six demands, raised in the letter to the Prime Minister, vis-a-vis legal guarantee of MSP for all produce based on C2+50, formula, withdrawal of draft "Electricity Amendment Bill, 202012021", removal of the penal provisions on farmers in the "Commission for Air Quality Management in the National Capital Region and Adjoining Areas Act 2021”, withdrawal of false cases against the farmers over the course of the movement, dismissal and arrest of Minister of State Ajay Mishra Teni, and compensation and rehabilitation to the families of the martyrs of the farm movement and allocation of land to build a memorial in their memory at Singhu morcha.

SKM has demanded that the Government restart the dialogue process without further delay to discuss these pending issues. In the next meet of the SKM scheduled for December 4th, the Morcha will take cognizance of further developments including the Parliament proceedings, and take a decision on the further course of action.

A massive Kisan-Mazdoor Mahapanchayat will be held at Azad Maidan, Mumbai on 28 November. The event to be hosted by over 100 organizations under the banner of Samyukta Shetkari Kamgar Morcha (SSKM) will be addressed by several prominent SKM leaders. The Mahapanchayat will witness a massive gathering of farmers and workers from across Maharashtra and will raise the demands of the farm movement including the legal guarantee for MSP, dismissal and arrest of Minister of State Ajay Mishra Teni, withdrawal of Electricity Amendment Bill, removal of penal provisions from Air Quality Management Act among others, along with the repeal of the four Labour Codes, halving the price of diesel, petrol and cooking gas, and an end to privatization of national resources. November 28th also marks the death anniversary of great reformer Mahatma Jyotirao Phule. The Mahapanchayat is a culmination of over month long programs which began with the flagging off of the Shaheed Kalash Yatras on October 27 from the birth place of Mahatma Phule in Pune. The Shaheed Kalash Yatras were taken across every district of Maharashtra, and spread the message of the farm movement, while seeking justice in the Lakhimpur Kheri massacre. Today, all these yatras reached Mumbai and paid homage to the statue of Chhatrapati Shivaji at Shivaji Park, the memorial to Dr B R Ambedkar at Chaitya Bhoomi, the memorial to Martyr Babu Genu who was crushed in Mumbai in 1930 by a British-driven truck when he opposed British cloth during the freedom struggle, and the statue of Mahatma Gandhi near Mantralaya.

Meanwhile, United Nations Special Rapporteur on the Right to Food, Michael Fakhri, welcomed the Government of India's decision to repeal the three farm laws and urged the Government to ensure accountability for the casualties of the farm movement. On November 12th, 2021, Mr. Farkhri had written a letter to the Government of India expressing his concerns regarding the three farm laws, saying, "These laws may interfere with the full enjoyment of the right to food of India's farmers, especially women as constituting the majority of small scale farmers in the country and all inter-related human rights.".

More reports are pouring from various states of India and different nations about the events held in the support of the farm movement on 26 November. Protest programs were held in several districts of Uttar Pradesh, Himachal Pradesh, Rajasthan, Kerala, Madhya Pradesh and Assam. In Tamil Nadu, notwithstanding the bad weather and heavy rainfall, protests were held in several locations including Chennai and Dindigul. In UK, protests were organized in the front of Indian High Commission, in the US, a "sleep out.' program was held in British Columbia, and solidarity programs were also held in Italy and France. India's Farm Movement has, in the truest sense, become a global and a historic phenomenon, and has become a beacon of hope for people's movements worldwide.

P.S.:Protests were also held in Bihar on the 365th day of the farmers struggle on Delhi's borders. In Patna, farmer organisations submitted a memorandum for the President with seven demands:

6. Construct memorial of 700 farmers and 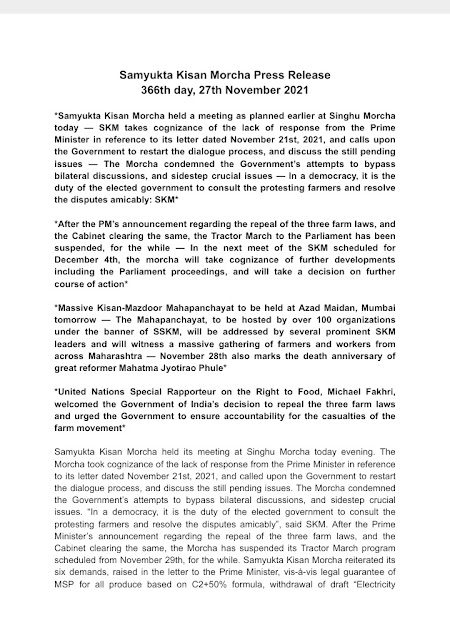 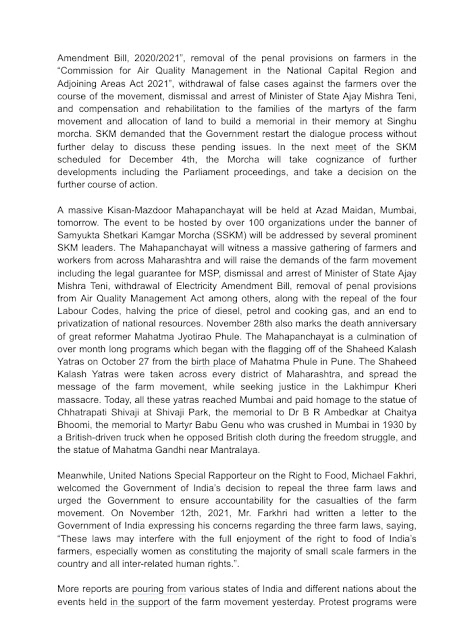 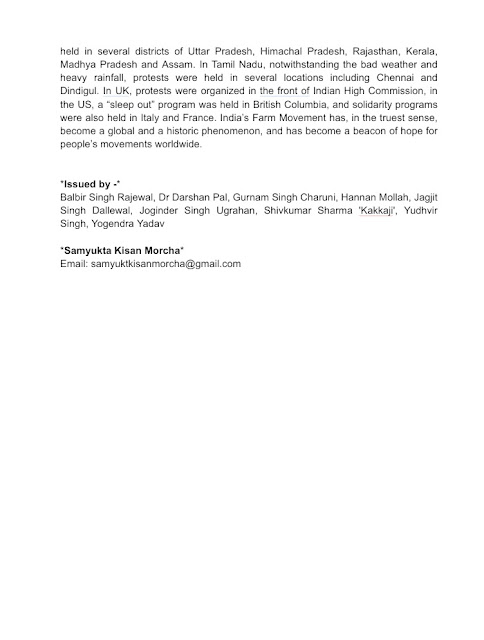 Posted by mediavigil at 5:50 AM