All India Lawyers Union writes to Delhi Chief Justice on incident of 15.02.2016 at Patiala House Court and seeks action against erring police officials!

All India Lawyers Union writes to Delhi Chief Justice on incident of 15.02.2016 at Patiala House Court and seeks action against erring police officials! 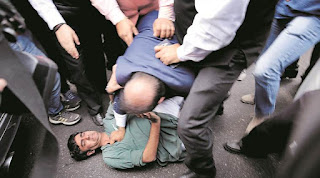 Sub: Representation on the incident of 15.02.2016 at Patiala House Court complex and request for appropriate action

Patiala House Court Complex incident dated 15.02.2016 calls for action to ensure administration of Justice and rule of law. Detail narrative is not required as the same is already in public domain. Suffice is to say that the lawyers affiliated to a particular ideology through social media invited their followers with inflammatory message.

About one hundred advocates gathered in front of the Court of the learned MM where JNU student leader Mr. Kanhaiya Kumar was scheduled to appear. This mob thrashed JNU faculty members and students who had come to attend the proceedings in the court. The mob did not spare even the advocates who had entered the court room to argue for the bail of the arrested person. The mob was so hysterical that they did not even spare journalists and the court staff. Advocates present in the court room were also assaulted.

The above incident at Patiala House Court has been shown on the electronic media and the reports which have appeared are sufficient to indicate the dereliction of duty on the part of the police. The police stood as a silent spectator. Not only this, the police personnel present there abetted the attackers. As a result of the above incident the remand proceedings of Mr. Kanhaiya Kumar could not be taken up in the open court at Patiala House.

That the mob was comprising of Lawyers identifiable in video footage and some outsiders. One MLA of Bhartiya Janta Party namely Sh. Om Parkash Sharma was caught on camera thrashing the members of public. The above acts tantamount to obstruction in administration of Justice and violation of rule of law which are corner stone of our Constitution.

All India Lawyers Union is approaching your good self with hope and trust that you as a head of Judiciary of Delhi shall protect the rule of law which is under threat. The persons who are identifiable as members of the mob and those who resorted to violence and obstruction to administration of justice have committed contempt of court and are required to be appropriately dealt with. For their brazen acts suomoto action by the High Court is called for. The police by their acts and omissions are guilty of dereliction of their duties. The Commissioner of Delhi Police is required to directed to discipline the police force under him and take appropriate action against the erring police officials.

▶
indianexpress.com/.../lawyers-attack-jnu-students-medi...
22 hours ago
A scuffle broke out at the Patiala House court in New Delhi on Monday afternoon after a group of about 40 ...

JNU row: Nothing wrong in killing those shouting pro ...

▶ 1:57
www.ibtimes.co.in › Society
1 day ago
A group of lawyers allegedly slapped one JNU student andattacked ... an unidentified man outside Delhi's ...

▶ 9:07
https://www.youtube.com/watch?v=rO0C2Efi4B8
1 day ago - Uploaded by IndianExpressOnline
A scuffle broke out at the Patiala House court in New Delhi on Monday afternoon after a group of about 40 ...

▶ 6:10
https://www.youtube.com/watch?v=44g-dnV7oe0
1 day ago - Uploaded by Samachar Plus
New Delhi: Journalists, teachers and students were on Monday afternoon ... JNU row: Students, teachers and ...

VIDEOS: Afzal Guru must not be eulogised: Congress | The ...

▶
indianexpress.com/.../jnu-row-lawyers-thrash-students-...
1 day ago
During scuffle, three journalists were also attacked by the lawyers ... Lawyers Attack JNU Students, Media At ...

VIDEOS: Probe underway into threat call to Yechury | The ...

▶
indianexpress.com/.../probe-underway-into-threat-call-...
1 day ago
Lawyers Attack JNU Students, Media At Patiala House Court: The Big Questions The ... JNU Students ...
--
Pl see my blogs;
http://ambedkaractions.blogspot.in/
http://palashscape.blogspot.in/
Feel free -- and I request you -- to forward this newsletter to your lists and friends!
Posted by Palash Biswas at 6:46 AM