Posted by The Himalayan Voice:
[Cadres of Samyukta Loktantrik Madhesi Morcah demonstrated in various parts in Birgunj defying the indefinite curfew enforced by the local administration since 4 pm on Monday. Police opened fire at the protestors when they reached the District Development Committee office.]
A Post Report, Kathmandu 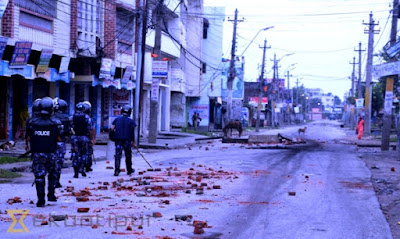 Sep 1, 2015- Four protesters died during violent protests in Birgunj of Parsa district on Tuesday. The death toll from the protests in Birgunj over the proposed seven-state federal set-up has climbed to five.
Three protesters injured in clashes with police at Laxmanuwa Chok in Birgunj died in course of treatment. Dinanath Sah and Bhola Prasad Sah, who sustained bullet during the clash, succumbed during treatment, National Medical College In-charge Dililp Sah informed.
Likewise, one Sohan Kalwar died on the spot during the clash in Naguwa Chok. A protester had died in Birgunj on Monday.
Around a dozen people including Madhesi Janadhikar Forum –Loktantrik (MJF-L) central member Ameri Lal Pal Raut were injured. Ameri Lal and Chaturi are said to be critical.
Meanwhile, the local administration has declared Birgunj a riot-hit area.
Police opened fire during a clash with protesters at around 1:30 this afternoon in Birgunj Sub-Metropolitan City-16. One of the injured is said to be critical. The injured are undergoing treatment at Narayani Sub-regionalHospital.
The number of people injured in Tuesday's protests has reached eight.
Earlier in the day, six people were injured in police firing during the protests against the proposed seven-state federal set-up.
Three people including a policeman and two staffers ofNarayani Sub-regional Hospital were injured when police opened shots into the air after the protesters mobbed the hospital.
It has been learnt that police opened fire at Gandak Chok of Birgunj at around 7:30 this morning after the agitators defied the curfew order.
The protesters torched two parked government vehicles at Inland Revenue Department.
Two children—identified as Dipesh Patel, 10, and Sandeep Patel—have been injured in police firing. They have been receiving medical attention at Narayani Sub-regionalHospital.
Cadres of Samyukta Loktantrik Madhesi Morcah demonstrated in various parts in Birgunj defying the indefinite curfew enforced by the local administration since 4 pm on Monday. Police opened fire at the protestors when they reached the District Development Committee office.
Nepal Sadhbhavana Party Chairman Rajendra Mahato reached the hospital to meet the two injured minors. Mahato, along with his cadres, defied the curfew order to reach the hospital this morning.
A large number of security personnel have been deployed in the area after early morning tension.
A protester succumbed to injuries from police firing more than 30 others were injured in Birgunj on Monday as the clashes between security personnel and protesters turned violent.
@ The Kathmandu Post

*
INDIA KEEPS OUT OF NEPAL'S INTERNAL MATTERS: OFFICIAL
[He tried to clarify India's position on Nepal's political and constitutional matters at a time when the neighbour's interests in Nepal's affairs vacillate between being controversial and cooperative.]
By Devendra Bhattarai, NEW DELHI
Sep 1, 2015- In the midst of political and social sensitivities in Nepal, "India refrains from commenting onNepal's internal matters knowingly or unknowingly", a senior South Block official said on Monday.
Indian officials were aware of what is happening in Nepal, said the official. "India is also informed about the efforts being made at consensus while Nepal reaches the last leg of bringing out a new constitution and completing the peace process."
He tried to clarify India's position on Nepal's political and constitutional matters at a time when the neighbour's interests in Nepal's affairs vacillate between being controversial and cooperative.
The official, who is in charge of Nepal affairs at South Block in the Indian capital but is not authorised to speak to the media, told the Post that India wants to see a constitution resulting from maximum and broader consensus. "We hope there will be a new constitution by mid-September as per the present understanding."
He clarified that India does not prescribe any form of federalism and religion. The recent visits of two former prime ministers Pushpa Kamal Dahal and Sher Bahadur Deuba had sent positive messages across to Nepal, the official said.
"We have heard that CPN-UML Chairman KP Oli has barred party leaders from visiting India. No UML leader has expressed interest to visit New Delhi," said the official. He added that leaders of Madhesi parties had never sought to visit India as reported in some Nepali media.
The official, however, refused to comment on Union Home Minister Rajnath Singh's statement concerning Nepal on Monday.
Blaming local media for "unnecessary hype", he said they were trying to render Nepal-India relations "abstract and meaningless". The official said concerned entities from both the sides should step up vigil against such reports.
'No relations with Amresh'
Meanwhile, the official said that the Ministry of External Affairs of India has no concerns over the activities of Nepali Congress lawmaker Amresh Kumar Singh, who claims to have good rapport with Indian leaders and cordial relations with the Indian establishment.
Some days ago, when there was opposition against him in the Madhes, he was trying to sneak into the Consular General's Office of India in Birgunj but he was denied entry, said the official.
The official, who keeps tabs on the developments in Nepal, said there was no need for India to extend relations with Singh. He also denied New Delhi's role in Sadbhawana Party's quitting the Constituent Assembly.
The official said some major agreements reached with Nepalparticularly in hydropower development should be considered as achievements in bilateral ties.
@ The Kathmandu Post
--
Pl see my blogs;
http://ambedkaractions.blogspot.in/
http://palashscape.blogspot.in/
Feel free -- and I request you -- to forward this newsletter to your lists and friends!
Posted by Palash Biswas at 8:27 AM