Among the controversial GM foods entering the Indian market is a genetically-modified replacement for mustard seed which requires the use of a potentially toxic herbicide.
By  MintPress News Desk  | 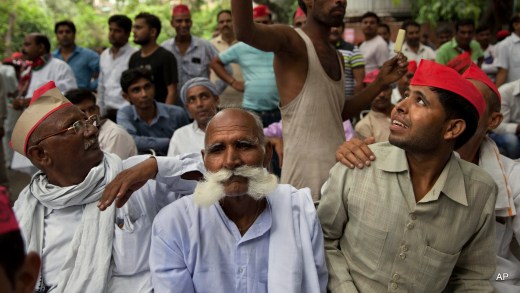 DELHI, India — India's government once opposed GMO crops but is now opening its doors to Monsanto and other international agriculture giants, despite widespread suffering and even suicide among farmers that feel pressured into buying their products.

As recently as 2010, India was known for its anti-GMO policies. Writing for Nature in May, Sanjay Kumar reports:

"Five years ago, India was a hostile place for researchers testing genetically modified (GM) crops. Its government barred the commercial planting of a transgenic aubergine (a vegetable locally known as brinjal) after protests from anti-GM activists. Then it gave state governments the power to veto transgenic-crop field trials. The result: an effective moratorium on such trials."

That all changed last year with the election of Prime Minister Narendra Modi, according to Kumar. "In the past year, eight Indian states largely aligned with Modi's Bharatiya Janata Party have approved field trials ofGM crops, between them allowing tests that include transgenic rice, cotton, maize (corn), mustard, brinjal and chickpea," he wrote.

India's food supply depends on small-scale farmers, who own 40 percent of agricultural land in the country, and the small farms which represent 92 percent of the country's farms, according to Colin Todhunter. In an article published earlier this month in Counterpunch, he argues that the entry of GMO foods into India is part of a global campaign to force small-scale food growers out of business in favor of large-scale, industrial agriculture:

"India's development is being hijacked by the country's wealthy ruling class and the multinational vultures. Meanwhile, the entrepreneurs who work the fields and have been custodians of the land and seeds for centuries, are being sold out to corporate interests whose only concern is to how best loot the economy. (Over the past decade or so, Monsanto has appropriated $900 million from small farmers in India.)"

Small-scale farmers are being encouraged to replace their subsistence crops with cash crops like coffee or cotton, the price of which can fluctuate dramatically. And because many GMOs contain "terminator genes" that prevent farmers from collecting seeds and replanting them in future seasons, growers must purchase the seeds afresh each year. This, combined with market variations, forces many into crippling debt. Advocates for traditional agriculture say it's created an epidemic of suicide in the country, according to a November interview with Alakananda Nag, the director of a short documentary about the crisis:

"'The large farms certainly have the funds to support themselves and get on, but the smaller ones are really ones that suffer the most,' Nag told RT. 'Monsanto definitely has a very big hand to play. A few years ago it was illegal to grow GMO crops in India. It's not like the suicide did not exist back then. It did, but I think there was definitely a sharp rise in the [suicide] numbers once [GMOs] were allowed.'"

A study released last year from the University of Cambridge put the epidemic in perspective: "In 2010, 187,000 Indians killed themselves – one fifth of all global suicides." The study's authors argue that poverty alone cannot account for the high rate of death:

"The researchers found that suicide rates tend to be higher in states with greater economic disparity – the more unequal the state, the more people kill themselves – but inequality as a predictor of suicide rates paled in comparison with cash crops and marginalised, indebted farmers."

One of the most controversial GMO products is a new form of mustard which is used to produce a traditional, popular cooking oil in India. According to food security activist Dr. Vandana Shiva, writing on Tuesday for The Asian Age, the GMO mustard seed features a terminator gene and requires the use of potentially toxic herbicides. "These are technologies for killing life, not for growing food. They must be banned," she urged.

"We need to stop the insanity of transforming mustard — the symbol of spring and abundance in our culture — into a toxic crop with terminator genes, sprayed with lethal herbicides that kill everything green and directly damage our health."

Watch "A Film on Farmer Suicides and Agrarian Crises in India" from Alakananda Nag and ActionAid India: