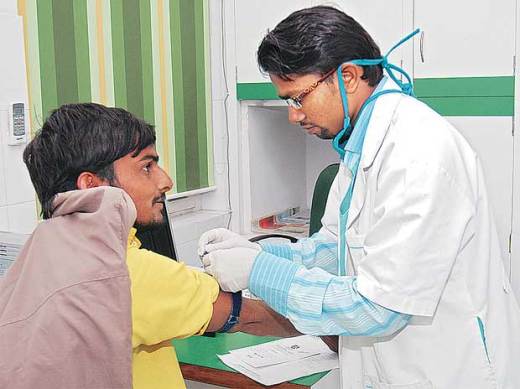 The NITI Aayog has objected to increasing investments and focusing on the public health sector as well as providing free drugs and diagnostics, as suggested in the updated draft National Health Policy of the National Democratic Alliance (NDA) government.

Asking for a revision, it has recommended that the private sector and insurance-based models be given a greater role in a public health system that would require people to pay for health services.

In a letter sent with the approval of its Chief Executive Officer, Sindhushree Khullar, the NITI Aayog has advocated a greater dependence on insurance-based models, with the private sector playing a central role. It said providing free treatment, diagnostics and medicines would be anachronistic at a time when the government was trying to rationalise and target the subsidy regime.

The NITI Aayog's views are in contrast to the redrafted National Health Policy. The policy had recommended investing 2.5 per cent of gross domestic product (GDP) on health care by 2020 and investing most of it in public health care systems, using the private sector only to fill the gaps. It had laid down general taxation as the route to mobilise resources, including a health cess along the lines of an education cess.

The government's think tank, in its letter to the health ministry, has suggested that the recently launched insurance schemes of the government should be the basis for reworking the health policy. But it noted: "Yes, we might say that the benefit package could be comparatively generous; but it is an issue which can be dealt with as the government gets more financial leeway."

The NITI Aayog said the government would find it difficult to mobilise more funding than the existing one per cent of GDP for public health care to provide a certain level of free care to people.

The NITI Aayog has called free care "a chimera".

The government has consistently struggled to provide even one per cent of GDP for health care and was banking on increasing investments in public sector health care, it said, adding it was an "astounding leap of faith fraught with potentially unfortunate consequences – that free services will be rationed as per budget/manpower availability."

"Even though one might find it morally and ethically reprehensible – this system of two-tier care – one for those with means and a voice and the other for the voiceless and indigent" will continue to exist in the short or even medium term as it would be logistically impossible to shift the majority of patient load from the private to the public sector.

While advocating against free health services to the people, the NITI Aayog has asked that a contributory sickness fund be created. People would contribute to this fund and through it be able to purchase health services from private and public sectors, according their choice.

The draft health policy, in contrast, had noted that public services provided a greater bang for the buck. "The public sector is value for money as it accounts for less than 30 per cent of total expenditure, but provides for about 20 per cent of outpatient care and 40 per cent of in-patient care. This same expenditure also pays for 60 per cent of end-of-life care (RGI estimates on hospital mortality), and almost 100 per cent of preventive and promotive care and a substantial part of medical and nursing education as well."

Giving examples of developing countries – which have a higher proportion of public health services – the policy said, "Health outcomes and financial protection are closely related to absolute and relative levels of public health expenditure. It would be desirable but ambitious if India could aspire to a public health expenditure of four per cent of GDP, but most expert groups have estimated 2.5 per cent as being more realistic. At such levels of expenditure, 'purchasing,' would have to be mainly from public providers for efficient use of resources with purchasing from private providers only for supplementation."

The NITI Aayog has raised several objections against increasing investments and dependence on public health infrastructure. "We need to assess whether drastically increasing investments will run in to the law of diminishing marginal returns, besides posing a challenge to the absorptive capacities of the state health systems." The draft health policy had said India's investments in health sector, at large, and in public health sector, specifically, are much lower than in most other developing countries that had delivered better health statistics.

The government think tank said, "The policy document does not specifically indicate a framework for engaging these (private sector) providers, barring expressing intent of regulating their quality through appropriate legislation or seeing (the private sector) as a resource for filling critical gaps in the public sector."

Sources in the government said the final health policy was expected to be further delayed and the steering committee of the government needed to address the dissenting views from the Aayog.

http://www.business-standard.com/article/economy-policy/niti-aayog-against-free-health-care-bats-for-more-private-sector-role-115082500061_1.html
--
Pl see my blogs;
http://ambedkaractions.blogspot.in/
http://palashscape.blogspot.in/
Feel free -- and I request you -- to forward this newsletter to your lists and friends!
Posted by Palash Biswas at 11:44 PM