India’s SHAME – Trapped in the gutter: The street cleaner with four degrees #WTFnews

India's SHAME – Trapped in the gutter: The street cleaner with four degrees #WTFnews 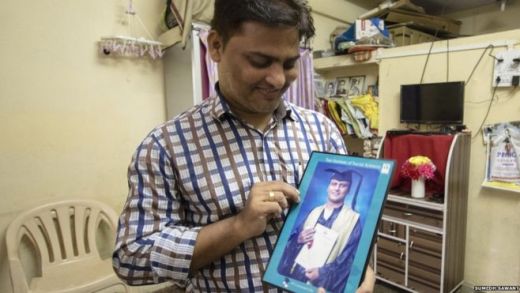 Sunil Yadav, a 36-year-old man from the western Indian city of Mumbai, is a fervent believer in the power of education.

His four degrees include a master's from the prestigious Tata Institute of Social Sciences (TISS) and he is now pursuing an MPhil – an advanced postgraduate degree.

However, according to his official identity card, Mr Yadav is still a sammarjak, which is an Indian word for a manual scavenger. A manual scavenger is someone who cleans human and animal waste from buckets or pits, and is performed by members of low-caste communities – and mostly by Dalits, also known as Untouchables.

Mr Yadav, a Dalit, says he was inspired by Dalit rights campaigner BR Ambedkar, who said that only education could bring about a change.

But change seems to have eluded him.

'What will you get out of studying?'

Mr Yadav's degrees have not brought him a promotion from his employer, the Municipal Corporation of Greater Mumbai (MCGM).

At present he is forced to move garbage in the city during the night while studying for his degree during the day. All employees are allowed a leave of absence to study, but Mr Yadav says his latest request was turned down.

"One of the officials told me that if he gives me a chance, he will have to give everyone a chance. He asked me what I would get out of studying. The administration treats us like slaves," Mr Yadav said.

Every course Mr Yadav sits for brings a new battle for leave to study.

He was granted leave for his masters degree only after he had protested for months.

The Mumbai municipality is believed to be India's richest local government organisation. It employs more than 28,000 conservancy workers, and about 15,000 contractual labourers.

Manual scavenging has been banned in India since 2013 but it is rampant and activists say tens of thousands are involved in this demeaning work which opens them to prejudice and abuse.

The Indian Express newspaper quoted senior officials in the state government as admitting the guidelines from the Prohibition of Employment as Manual Scavengers and their Rehabilitation Act 2013 have not been properly implemented in the state.

Milind Ranade, who is the general secretary of a Mumbai based organisation that works for rights of conservancy workers told the BBC: "The Municipal Council plays around with the definition of manual scavengers."

By definition, manual scavengers use their bare hands to pick up rubbish or human faeces – and councils use this to take advantage of a technicality, Mr Ranade says.

"While the workers do not use hands to pick garbage or night soil, they use a broom or a spade. There are streets where squatting is a phenomenon and the workers have to clean it. It is hazardous in any case.

"That's how they legalise this profession," he adds. 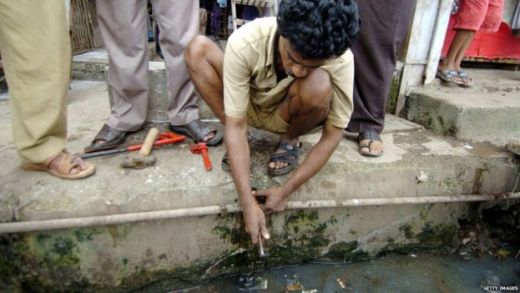 In August 2014, rights group Human Rights Watch called on the government "to ensure that local officials enforce the laws prohibiting this discriminatory practice".

In many ways, Sunil Yadav was born to become a conservancy worker – he simply inherited his father's job as is the norm in this profession dominated by Dalits.

Many workers who have managed to educate themselves are forced to remain scavengers because they are effectively not allowed to do anything else.

In 2014, Mr Yadav applied for the post of the Labour Welfare Officer, but was not selected on technical grounds. "I do not understand why they can't promote us to jobs that we deserve," he said.

But his plight is hardly unique.

In 2013, 11 workers from the Mumbai Municipal Sangh (Union) filed a petition in the Industrial Labour Court questioning why they were not considered for promotions. The petition alleged that people from other departments were given the opportunity instead. The case is still pending.

Pramod Jadhav, 41, who also works as a sweeper with the municipality, completed his masters in political science two years ago.

"I have tried applying for higher positions, but I have no hope. In fact, as a rule employees who complete post graduation should get increments. My senior wrote back to me saying that it is inappropriate to give an increment to the fourth class [lower-level staff]," he told the BBC.

"The word scavenger on my identity card and salary slip is the start of exploitation. It is casteist. The administration is equating us to vultures, who are nature's scavengers," he said.

The municipality has, meanwhile, denied any prejudice. "They get promotions after they compete for the job as per recruitment rules. There is no prejudice," Prakash Patil, deputy municipal commissioner told the BBC. 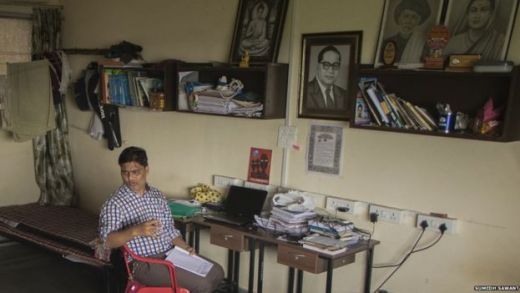 All the workers who spoke to the BBC said it was difficult for them to obtain secure jobs despite their degrees.

And the government housing they get for being in this job is a huge consideration in a city with one of the most expensive real estate markets in the world.

"Many of our workers are not willing to leave the profession, because they are afraid to lose the government housing. About 6,000 of us live in municipal quarters," said Sunil Chauhan, president of a workers' union.

However, Dalit thinker and political commentator Chandra Bhan Prasad says, "Occupation is central to the caste system. If they continue to work in the municipality, they are just internalising slavery. They should separate the occupation from the caste, and desert the profession. Only that will give the system a jolt."

--
Pl see my blogs;
http://ambedkaractions.blogspot.in/
http://palashscape.blogspot.in/
Feel free -- and I request you -- to forward this newsletter to your lists and friends!
Posted by Palash Biswas at 11:39 PM