As per law, name of Aurangzeb Road, in Delhi cannot be changed 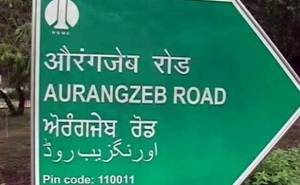 PRESS STATEMENT on behalf of Citizens For Democracy

As per law, name of Aurangzeb Road cannot be changed

Citizens For Democracy, 'CFD' in short,  is shocked that the New Delhi Municipal council, NDMC in short, has decided to rename the  'Aurangzeb Road' in New Delhi as the 'Dr.A.P.J. Abdul Kalam Road'. The said decision is totally illegal, unjustified arbitrary and against our constitutional ethos. It appears to be guided by not reason and law but by  narrow communal consideration.

It is well known that a section in BJP has long been agitating to change the name of Aurangzeb Road to some other names but it each time this proposal has failed. For example in October 2014  BJP had requested NDMC to rename the name of 'Aurangzeb Road' to 'Guru Tegh Bahadur Singh Road' but it was not allowed. On 17th December,2014 Shri Haribhai Parathibhai Chaudhary, Minister of State for Home Affairs,  made a statement on behalf of the Home Ministry that  Aurangzeb Road could not be renamed since the policy is not to rename any  road named after a historical figure. Thus as per guidelines of the government, the name of the 'Aurangzeb Road'  cannot be  changed. The memory of Dr.Abdul Kalam could have been better served by building  a scientific or educational institute  under  his name.

We therefore  demand that NDMC should immediately withdraw that decision and  not to take any step for implementing the said decision.

A notice in this respect has already been sent to the concerned authorities on behalf of the Citizens For Democracy (CFD).

--
Pl see my blogs;
http://ambedkaractions.blogspot.in/
http://palashscape.blogspot.in/
Feel free -- and I request you -- to forward this newsletter to your lists and friends!
Posted by Palash Biswas at 7:34 AM