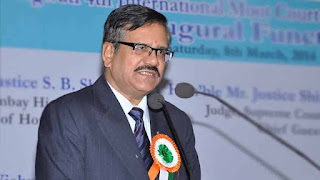 The Court gave a direction staying Union Ministry’s communication dated March 31 to the TDSAT Chairperson asking him to demit office by April 20, 2021. The communication cited the new Tribunals Reforms Ordinance, which mandate that the tenure of Chairperson cannot exceed 4 years. This communication was challenged by lawyers who practice in the Tribunal. The order reads: "In view of the AG's submissions, the extraordinary situation and letter dated May 31, 2021, we are of the view that Justice Shiva Kirti Singh will be continuing as Chairman till fresh appointment is made. We request the Chief Justice of India to expedite the process of appointment".

The Central Government has notified the Tribunals Reforms (Rationalisation and Conditions of Service) Ordinance, 2021, to dissolve certain existing appellate bodies and transfer their functions to existing judicial bodies. A Bill was introduced in the Lok Sabha in this regard during the Budget Session but it could not be taken up for consideration and passing. Justice Shiva Kirti Singh assumed the office of Chairperson, TDSAT on April 21, 2017.

He completed schooling from Sainik School Tilaiya, now in Jharkhand, He graduated in Political Science from Patna College. He did his post graduation from Patna University and LL.B. from Patna Law College. He enrolled as an Advocate on March 17, 1977. He was designated Senior Advocate on January 17, 1990. He practised in Patna High Court in Civil, Criminal, Service and Constitutional matters. He served as counsel for Bihar State Electricity Board for several years. He was elevated as permanent Judge of Patna High Court on December 29, 1998. He served as Executive Chairman of Bihar State Legal Services Authority from March 7, 2006 to October 16, 2012.

Justice Shiva Kirti Singh was part of the 3-Judge Bench that commuted the death sentence of 15 people in Shatrughan Chauhan v Union of India (2014) because undue delay by the President in rejecting mercy to a death row convict amounted to torture. The time taken by the President in rejecting mercy petitions of the 15 prisoners ranged between 11 years and 1.5 years. This has paved the for India to adopt a more humane process committed to the rule of law until the very end in carrying out death sentences. The bench took the view that the crime in question is irrelevant in deciding the effects of keeping a death row prisoner waiting for a decision on his or her mercy petition. The suffering that comes with anticipating death on an every day basis for the judges amounted to torture, which was violative of the right to life under Article 21 of the Constitution. This is the bench that declared that the 2-Judge bench decision of the Supreme Court in the Devender Pal Singh Bhullar v State of NCT of Delhi (2013) that those sentenced to death under anti-terror laws are not allowed to invoke the argument of undue delay to argue for commutation, was held to be flawed application of an earlier decision of the 5-Judge bench of Supreme Court in the Triveniben v State of Gujarat (1989). By declaring Bhullar per incuriam, this bench has done away with notorious judgements delivered in 2013. This bench held that enforcement of rights was within its jurisdiction and what constitutes the content of fundamental rights of all persons is determined by the judiciary.

Posted by mediavigil at 7:04 AM