Watch out potential spoilers ahead 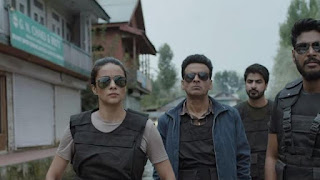 Be it web series or cinema, There are a lot of movies filled with heroic stories of people fighting against terrorism. But the family man is one of its own type blending a spy thriller with lightweight humor derived from daily life. It is a new spy thriller from India is currently streaming on Amazon video streaming platform prime video.

The story revolves around precluding a Pakistani militant attack expected to bigger than 26/11 names”Mission Zulfiqar”.

Manoj Bajpai as ‘Shrikant Tiwari’ plays the leading role, dealing with family problems and professional at the workplace. He is basically from Varanasi but currently living in Mumbai with his family.

He tries to balance his life as Intel agent and common man. for his family is merely a file pusher at government office. In reality, Shrikant works for TASC which works closely under the NIA monitoring and ensuring national security. The show brings the light on economic conditions of Intel agents working for the country as Sri (Srikant) wants to own a house but is unable due to home loan request stuck in process.

Filmed by Raj nidimare and Krishna D.K, creators claimed series to be based on true events as reported by the media. Well, it features some contemporary political issues like Islamic radicalization of Muslim youths, rising Hindu nationalism, cow vigilantism, mob lynching, and Kashmir dispute. It also includes some scenes from Balochistan and international informal cooperation against terrorism.

The series offers an awesome overall package for viewers. The only downside is ten-episode of almost 1-hour run time making it a bit overstretched.

https://coveragedaily.wordpress.com/2019/10/14/the-family-man-review/
Posted by subhash kumar gautam at 8:21 AM