If Hillary wins defeating Trump,would the result be different? Would Hillary make a pledge to hang Bush for his war crimes against humanity for which the globe has been mapped with the lines of bleeding war civil war crusade spring victims worldwide?Would Hillary promise to try Bush for his conspiracy to burn America in oil fire,for the murder and rape of sovereign Iraq and Afghanistan before she takes oath as the first Woman President of United States of America? Palash Biswas

If Hillary wins defeating Trump,would the result be different?

Would Hillary make a pledge to hang Bush for his war crimes against humanity for which the globe has been mapped with the lines of bleeding war civil war crusade spring victims worldwide?Would Hillary promise to try Bush for his conspiracy to burn America in oil fire,for the murder and rape of sovereign Iraq and Afghanistan before she takes oath as the first Woman President of United States of America?

Welcome!Hillary Clinton officially became the first female major party nominee for president in the history of the United States!

Donald Trump represents Americanism.It means he is representing the hall of American Fame made of all the US Presidents who had been the genocide masters,brute racist war criminals,Donald Trump has got the DNA of Ku Klax Klan.

This Americanism all about the ethnic cleansing of black humanity worldwide all on the name of American interest which Trump defines better as America first.

Anti Islam Trump agenda of fascism as well as apartheid is nothing new.We have seen senior and junior Bush as US President during Oil War phase one and phase two.

For example as Independent reported:

The Iraq War was illegal, according to Lord Prescott, the deputy prime minister at the time of the 2003 invasion.

The Labour heavyweight used his strongest language yet to condemn Tony Blair's decision to take part in the Iraq War, a decision he supported at the time.

Writing in The Sunday Mirror the peer said: "I will live with the decision of going to war and its catastrophic consequences for the rest of my life. 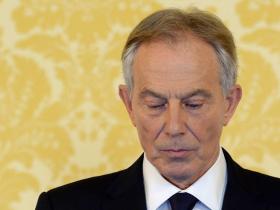 Tony Blair could be sued for 'every penny' by soldiers' families

"In 2004, the UN secretary-general Kofi Annan said that as regime change was the prime aim of the Iraq War, it was illegal.

"With great sadness and anger, I now believe him to be right."

Lord Prescott said the Chilcot report was a "damning indictment of how the Blair government handled the war - and I take my fair share of blame".

"As the deputy prime minister in that Government I must express my fullest apology, especially to the families of the 179 men and women who gave their lives in the Iraq War."

He also welcomed current Labour leader Jeremy Corbyn's decision to apologise on behalf of the party for the war.

The Chilcot report strongly criticised the way former prime minister Mr Blair took the country to war in 2003 on the basis of "flawed" intelligence with inadequate preparation at a time when Saddam Hussein did not pose an "imminent threat".

Would Hillary make a pledge to hang Bush for his war crimes against humanity for which the globe has been mapped with the lines of bleeding war civil war crusade spring victims worldwide?

Would Hillary promise to try Bush for his conspiracy to burn America in oil fire,for the murder and rape of sovereign Iraq and Afghanistan before she takes oath as the first Woman President of United States of America?

It is not possible.

America did not try President Nixon or Henry Kissinger for war crimes in Vietnam war.

Rather War criminals from every nation has to get shelter n America all on the name of American interest.

We have very recently witnessed a dramatic  turnaround in the case of   a most unwanted war criminal from India whom President Barack Obama welcomed on red carpet.

Has the first ever Black President of America,the outgoing President Mr.Barrack Obama did anything different during his back to back two terms in the White House?

We have seen the Clinton couple in the White house earlier.The roles would be changed if America gets first woman president but the result would not be different.

Apartheid is American DNA and America is more divided than any other nation on this good earth where black humanity is as much as  a scapegoat as dalits and tribal landscape in Indian geopolitics.The strategic relationship is all about ethnic cleansing.

Global media has focused on Hillary Clinton which reports that The Democratic Party has made history by nominating Hillary Clinton to run for US president as the first woman to head a major party's presidential ticket.

Speaking via video link from New York after her nomination on Tuesday night, Hillary Clinton told the Democratic National Convention in Philadelphia that she was honoured to have been chosen as the party's nominee.

"I am so happy. It's been a great day and night. What an incredible honour that you have given me. And I can't believe that we've just put the biggest crack in that glass ceiling yet. Thanks to you and everyone who has fought so hard to make this possible," she said.

"And if there are any little girls out there, who have stayed up late to watch, let me just say: I may become the first woman president, but one of you is next."

--
Pl see my blogs;
http://ambedkaractions.blogspot.in/
http://palashscape.blogspot.in/
Feel free -- and I request you -- to forward this newsletter to your lists and friends!
Posted by Palash Biswas at 6:43 AM