In the post-Mandal era, Lalu Prasad seems to have been replaced for good in Bihar. JDU led Bihar government has geared up for the upcoming assembly election due in October/November 2010.

The 42 months rule of JDU led government appears uneasy in its relationship but it needs the 55 MLAs to keep his government afloat. With another 18 months left in its five year tenure, the government has approved a Rs 815 crore ambitious project for Mahadalits (a separate category for 18 sub-castes of dalits). The steps taken for empowerment of extremely backward castes (EBCs), Mahadalits and minorities benefited Nitish led government in the Lok Sabha elections.

His focus on Pansmanda Musalaman (i.e. backward Muslim community) is also quite strategic in dividing the Muslim vote banks like he has divided Dalits and Hindus. Reopening of Bhagalpur riots also is aimed at the same.

He has got Ali anwar and Dr Ezaj Ali sent to Rajya sabha as well as a crucial signal to the Muslim community.

Nitish Kumar is seeking special category status for Bihar and has made it a huge public issue.

Ram Sundar Das, a former chief minister joined the JDU just before the Lok Sabha elections. He defeated Ram Vilas Paswan who had retained Hazipur seat in eight elections. Das had lost the chief minister’s job to Lalu Prasad Yadav in 1990. Janata Dal had won the most seats in Bihar Assembly. Lalu Prasad ruled Bihar for 15-year until Nitish led coalition defeated him 2005.

Nitish Kumar has focused on the EBCs (includes many poorest sub-castes), which account for over 20 percent of Bihar’s eight crore people. He has introduced a 20- percent reservation for them in village panchayats.
Posted by mediavigil at 3:17 AM 5 comments: 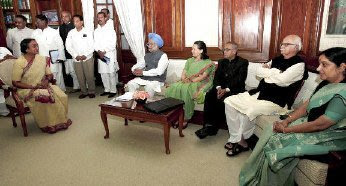 Sonia Gandhi's choice of Meira Kumar, daughter Jagjivan Ram, the former Deputy Prime Minister who had to walk out of Congress is meant to send a clear signal to Dalits across the country.

L K Advani, Mulayam Singh Yadav, Lalu Yadav recalled Jagjivan Ram's rift with the Congress party while claiming him to be their own. BSP was part of the chorus welcoming Kumar's ascension to the top chair. For BSP, likes of Jagjivan Ram has been the ‘co-opted’ used by Congress against Ambedkar.

Kumar has defeated both Mayawati and Ramvilas Paswan in the 1985 Bijnore by-election.

Bihar politics was yet again played out in LS, with JD(U) president Sharad Yadav and his bete-noire Lalu Prasad using the inauguration of Speaker Meira Kumar to settle scores with each other.

The newly-elected Speaker, who, like the other two leaders, too hails from Bihar, however, made a timely intervention, preventing the scene from getting uglier. She was constrained to issue her first directive as Lok Sabha Speaker soon after when she asked the House reporters to expunge parts of the exchanges between the two Yadav satraps. Meira Kumar is a Congress MP from Sasaram, Bihar.

Trouble arose when the former railway minister, in his speech welcoming Ms Kumar's election as Lok Sabha Speaker, deviated from the standard practice of hailing her elevation, and said her anointment on the post should not be seen as a mere tokenism.

RJD chief recalled the role of her predecessor Somnath Chatterjee, saying he had shown how a Speaker should be above party-affiliations. When the issue of nuclear deal arose, Chatterjee, he said, took a stand "which went against the Left parties. But he did not budge. A similar situation may arise before you and you will have to take tough decisions".

He sought to caution Speaker against the Opposition’s real gameplan. "All leaders have promised Speaker that they would cooperate in smooth running of the House. But I have my doubts whether these promises will be kept," Lalu Prasad said in his usual tongue-in-cheek style, evoking laughter from a section of the members.

What invited Sharad Yadav's interruption was his charge that the NDA government, when it was in power at the Centre, had refused to approve welfare schemes initiated by the then RJD government in Bihar for the welfare of SC/STs.

The JD(U) leader, at this juncture, sought to remind him that this was not the occasion to play politics. When interrupted again after some time, the RJD leader retorted by saying that Parliament was the platform from which politics was generally played out.

"We've come here to do politics. You may do Hari-Bhajan if you like," Lalu Prasad retorted as other members watched silently. Rather than joining issues with the irrepressible RJD leader, Sharad Yadav opted to remain silent after this. The newly elected Speaker later ordered portions of the exchange between the two Bihar leaders to be expunged.

Grapevine from Congress sources suggest that Meira Kumar would be the Chief Ministerial candidate in the next Bihar assembly elections. Isn't her refusal to resign from the membership of Congress Party even after assuming Speaker's chair pregnant with some such meaning?
Posted by mediavigil at 3:03 AM No comments:

The Bihar government carried out an economic survey for the year 2008-09. The report of this survey was published in Feb 2009. It provides some interesting highlights of the economy in Bihar.

1. Out of the entire Bihar population 89.5% stay in the rural areas